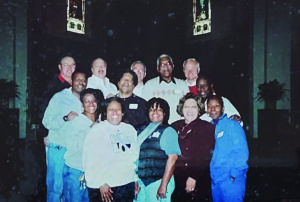 Precious Blood spirituality is the welcoming feeling you receive when you enter a parish or a room for the first time and you feel at home. It is feeling appreciated as a person; it is being welcomed to share your gifts and talents with your church community. It is being missed when you do not attend Mass. It is the overwhelming feeling of “Hey, where have you been?!” when you return to Mass after missing a few Sundays for whatever reason, with no questions or judgement. It is the love and support you receive through the struggles of life just by attending Mass.

Our nurturing and spiritual stories as African American Catholics in Cleveland are intertwined with the history of St. Adalbert/Our Lady of the Blessed Sacrament (sa/olbs) and St. Edward parishes. Both were staffed by the Sisters of the Blessed Sacrament and Precious Blood priests, brothers, and sisters. We learned life lessons about faith, family, perseverance, and challenging work. Some of us attended Catholic schools and were taught the value of daily prayer and discipline. Some of us are converts as a result of our children becoming interested in the Catholic faith while attending St. Adalbert school.

These are the lessons and charisms we learned from our Precious Blood priests and brothers for over seventy-two years, but when our parish was suppressed in 2010, we were forced to see how unloving, unwelcoming, and unappreciated we really were as African Americans in the larger Catholic Church. We visited approximately fifty churches within the Cleveland diocese. Sadly, the ethnically-centered churches (Hungarian, Sloven, Slovak, Polish etc.) tended to be the most indifferent as well as intolerant.

Because we understand that Catholicism is really “universal,” we continued undaunted and revisited places that were unwelcoming, not to intimidate or agitate, but to show that we are the Church, not our nationality or the color of our skin. Some treated us the same as the first visit, while others were more welcoming. The coldest comment we heard was, “We hope you find a parish.” The most insensitive gesture we experienced was when no one would join the line we were in for Communion but joined a separate line. During the same Mass, the priest refused to distribute the Blood of Christ, leaving it on the altar. It should be noted that though this occurred in a Hungarian parish, it is located in the heart of the African American Community. The church had the appearance of being closed, but we found the Mass schedule on the Diocesan website. Thank God for technology.

We were not looking for a church home; we were being challenged to continue the life lessons we had learned through our relationships with the Precious Blood community while appealing the decision to close our parish. We had become “Roamin’ Catholics.”

The visits had a range of eye-opening experiences, both positive and negative, and gave us opportunities to form and continue relationships. Along our journey, we met people from other churches that had been closed who appealed their parishes’ closings. Like us, some of those parishioners had begun visiting other parishes or just stopped attending Mass. The Mass was and continues to be important to us because we are one with Jesus each Sunday that we gather at the table of God and share in the Eucharist. The body and blood of Jesus sustains us always, gives us the encouragement, energy, and hope to continue.

During the appeal process, we gathered with former sa/olbs parishioners in January to celebrate Martin Luther King, Jr.; early summer for Black Catholic Sunday at the Sorrowful Mother Shrine in Bellevue, Ohio; and in the late summer for a healing Mass with Fr. Gene Wilson. We also continued to gather monthly as Companions, visit with fellow Ohio Companions for an annual gathering that rotates between Cleveland and Columbus, as well as attend retreats at Maria Stein and St. Charles.

Finally, exactly two years after our parish was closed, it was allowed to reopen. Although we were delighted, we were also heartbroken because the Precious Blood community had taken its leave from Cleveland and would not be returning. We worked through our adjustment with a diocesan priest using the circle process with the assistance of the Precious Blood community to help us express our fears, expectations, strengths, and weaknesses.

We Companions met with our new pastor and a Precious Blood priest at the main altar of our church. It was a very difficult and rewarding process. We were able to openly and honestly express how each felt about the two years without our parish, the loss of Precious Blood community, and the acceptance of a diocesan priest. We were able to acknowledge our differences and were reminded it was new situation for each of us. We shared stories of our spiritual growth and traditions. Most importantly, we learned of our similarities. We agreed to disagree and work together to glorify God and carry his message in our community.

Our new journey has been challenging. Over sixty percent of our parish members had joined a new parish, stopped attending church, changed churches, or had passed away. All of the “Roamin’ Catholics” returned to sa/olbs and have served as church leaders and organizers. Developing a relationship with our new pastor was difficult for us because we longed for the spirituality we had experienced with the Precious Blood community that wasn’t there with our new pastor. He is a wonderful person, and we have grown to know, love, and trust each other. We were blessed to learn that he had volunteered to be our pastor when he learned we would be allowed to reopen. And so we let go of the past, treasure our memories, and forge ahead with new relationships, a new beginning, and the opportunity to continue to share our lessons learned.

Ministries: Past or Future?

This summer I took a month-long course in German as a language requirement for school. I passed the final exam, but sadly I didn’t obtain enough proficiency to understand Angela Merkel when she visited the U.S. this summer and answered questions in German from the White House. I did catch the verbs at the end of the clauses or phrases in her remarks though.

Spiritual memoirs and writings from saints in recent years and centuries ago seem to be popping up on bestseller lists today. A striking component of memoirs and biographies rose to the surface in our conversation in my German class this summer: it’s usually wealthier or upper class folks whose memoirs are published. It’s not usually lower class or working class people who have the time, let alone the resources, to put pen to paper and produce a transcript for a publisher.

I sometimes describe graduate school as an endless experience of professors, classmates, and others recommending 5-10 books each week for me to read, on top of class reading. In today’s digital age it also includes recommendations for Substack subscription emails, including Boston College history professor Heather Cox Richardson’s “Letters from an American.” On Labor Day, Richardson wrote about Frances Perkins’ tenure as Secretary of Labor under President Franklin Roosevelt and her influence in eliminating child labor and securing unemployment insurance, health insurance, 40-hour work weeks, and a minimum wage for working Americans. Although the work of the first woman to serve in a presidential cabinet gets a lot of attention, Richardson’s Labor Day letter centered mostly on what motiated her to serve in the Department of Labor: the Triangle Shirtwaist Fire in 1911, when 147 young people died in a fire at a factory on Washington Square in New York City where the factory owner had locked the roof exit doors to keep workers from stealing.

From the years of massive industrial work at the turn of the 20th century in the U.S., we have so few memoirs or stories of some of the poorest immigrants. So too in the volumes of the lives of the saints we rarely get stories from the margins of wealth or privilege. The irony here somewhere between blessed are the poor and the canonical of title of Blessed accorded in the canonization process. My German professor this summer shared with us that she wrote her dissertation based on her interviews of the experience of the Shoah (Holocaust) for poor and middle class women. The reason was that most of the memoirs of those who survived the Shoah were from those who went back to being upper class or wealthy and who had the time and resources to write about their experience. The women interviewed by my professor didn’t have time to write on top of their jobs in factories, farms, or elsewhere.

If the doing part of our faith today—the side of the church Gen Z’s and Millennials are far more interested in than the doctrinal or dogmatic side—is the interweaving of the story of God and of God saving God’s people, then whose voices have been left out and whose voices are we continuing to leave out?

The Missionaries of the Precious Blood are preparing to take a big step in the formation of a single province in the United States. A single province of the Precious Blood community is not something entirely foreign in the United States in our history. It is a history that includes German-speaking Catholics in the Midwest, a community that was undivided between religious men and women in the community for decades, and also a community that reached nearly from coast to coast within a few decades of arriving in this country. Any moment of change presents the potential of nostalgia for what was—or rather for what we think it was. But as a step towards the viability and vitality of the Precious Blood community in this country, the creation of the United States Province is a step towards the future. Who will we be in 50 years? 100 years? These are questions every religious order is grappling with these days. At the same time that this is a step towards the future, it is a step towards a history too, hopefully a history full of vitality and vibrance in the church. One of the key pieces of this active history writing is who is writing this history and whose narrative or perspective is getting lost or being excluded.

A dominant strain for every community today is what ministries to let go of and what ministries to staff, though our phrasing of it turns back towards nostalgia: what do we keep and what do we let go of. The German-speaking needs to which Fr. Brunner responded are not the needs 50 and 100 years down the road, though we sometimes position our ministries and parishes as needing to maintain what was started more than a century ago. If our focus of who we are or where we serve is centered in the era of a century ago, we are not stepping into the future or even the present, but instead a museum of the past. The church today in the United States is moving out of the Northeast and Midwest, substantially being shaped by Hispanic/Latino Catholics, as well as immigrants from around the world, and is caught at the intersection of wealth and privilege for many White Catholics and immense poverty and struggles to make ends meet for a growing majority of Catholics in the country. If our present moment as a community is in the midst of the margins from a century ago and not today’s margins of the church and society, we are writing a history for the next generation that might be anything but reflective of the Precious Blood.