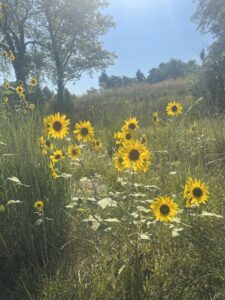 Following an unusually hot spell in September, we were blessed with more normal temperatures in Kansas City. It’s been a lot nicer to take my post-lunch walk around the grounds of the Precious Blood Renewal Center. I love walking over on the southeast side of the lake. The gravel path follows the grassland that was planted a few years ago, ringed by an ample number of trees.

The seasons reveal different new glories as the growing season moves forward. The spring reveals the greenish blue of the native grasses. These are followed by coneflowers of different hues. In August and September, the sunflowers extol the glory of God with their yellows ringing rich black. Then the goldenrod takes its turn to show off. The natural beauty of this prairie and forest is in stark contrast with the noise of the interstate and the looming gray ugliness of the newly built warehouse just across the parkway.

One day when I was walking along this path, it struck me that by devoting this section of land to native plants, we are engaging in an act of recon- ciliation with God’s creation. A good chunk of the land we are entrusted with at the Renewal Center is devoted to trees and grasslands. These native prairie grasses and flowers are beautiful and surprisingly resilient. Most important, they do great work in offsetting some of the worst actions we have taken to hurt the Earth and God’s creation that inhabits it. These grasslands do not require the hours of mowing by machines that consume fossil fuels and produce localized pollutants and noise. 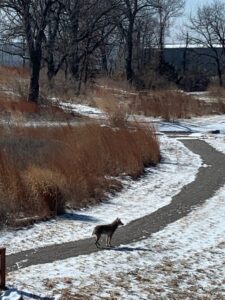 This rewilded area supports a biodiverse area for plants and animals. The grasses, flowers, and trees provide expanded habitat for bugs and a surprising number of animals. Since that part of the Renewal Center grounds was converted from lawn to prairie, there has been a notable increase in the fauna there. It is not unusual to see deer, turtles, snakes, coyotes, and birds of all kinds.

In addition, these plants effectively absorb greenhouse gasses, which Project Drawdown, an organization working to stop human-caused climate change, describes as a “carbon sink.” They do this much better than a manicured lawn.

Reconciling with the Earth is a small act of reconciliation. It should be a part of broader efforts by all of us as individuals, as a Precious Blood community committed to renewal and reconciliation, to care for our common home and a reframing of how we view and treat it.

Pope Francis writes in “Laudato Sí” that “[Mother Earth] cries out to us because of the harm we have inflicted on her by our irresponsible use and abuse of the goods with which God has endowed her.” He continues: “We have come to see ourselves as her lords and masters, entitled to plunder her at will.”

He challenges all of us even more firmly with quotes from Orthodox Patriarch Bartholomew “for human beings … to destroy the biological diversity of God’s creation; for human beings to degrade the integrity of the earth by causing changes in its climate, by stripping the earth of its natural forests or destroying its wetlands; for human beings to contaminate the earth’s waters, its land, its air, and its life—these are sins” since “to commit a crime against the natural world is a sin against ourselves and sin against God.”

Embracing this challenge requires us to have a change of heart. Pope Francis cites his predecessor Pope Benedict in a call to find the way of love, which is moving from our own individual wants and desires to what God’s world needs. This means liberating ourselves from fear, greed, and compulsion.

Changing our hearts should lead us to deeper reconciliation with our common home and each other. Action should follow our turning away from the sin against nature. Our actions need to include reducing emissions of greenhouse gasses and other pollutants by using less and becoming more energy efficient. Better efficiency can be achieved through technological tools that include renewable sources of energy and technologies such as higher efficiency light bulbs and means of transportation. 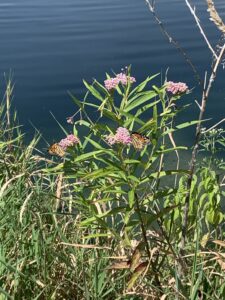 However, we are not going to be able to use technology to get us out of this crisis. A major part of this is reordering our lives to use less. It means shaping our communities in ways that reduce dependence on automobiles and prioritize walking, bicycling, and public transportation. It will require us to think about how much waste we produce through non-reusable items and other consumer goods that have short useful lives that end up in landfills or as litter. We will need to think about our food systems that produce a great deal of waste and greenhouse-emitting byproducts. The waste from spoilage of food is especially troubling since a good deal of that could go to feeding people.

Our overuse of land for agriculture and other commercial purposes also takes away from wild areas. These wild environments, on a larger scale than what is happening at the Renewal Center, need to be protected and expanded. Wild areas are wonderful carbon sinks. They are our best way to reduce the amount of greenhouse gasses currently in our atmosphere. They have the added benefit of protecting and promoting biodiversity, while ensuring the longevity of our sources of freshwater.

Tim Deveney is director of Precious Blood Volunteers and a member of the US Province’s Justice and Peace Committee. 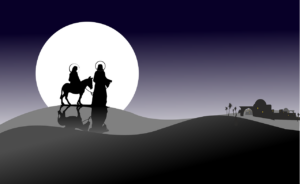 One of my fondest childhood memories of Advent was celebrating the Novena known as Las Posadas that takes place from December 16 to December 24. This is a Mexican Advent tradition commemorating the journey that Joseph and Mary made from Nazareth to Bethlehem in search of safe lodging (Posada) where Mary could give birth to the baby Jesus. Not finding a place of welcome in the crowded inns of Bethlehem, Joseph and Mary were forced to seek shelter in a nearby stable.

As we celebrated each Posada, a child dressed as an angel would lead the procession with a candle. If the community had statues of the peregrinos (pilgrims) Joseph and Mary on a donkey, they would be carried following the angel. If there were no statues two children would dress as Mary and Joseph. These pilgrims would stop at two homes and ask for Posada (a place at the inn) in song. The reply that there was no room would be sung in response. Finally, in the third home, the pilgrims would be welcomed. The people following the procession would enter with Mary and Joseph and the community would enjoy hot chocolate and Mexican bread while the children broke the piñata.

As Mary and Joseph are turned away and finally find welcome we should consider who is the stranger that we are called to welcome? It may be the refugee, the asylum seeker, or someone of a different color or culture. Could it also be the person with whom we vehemently disagree? We must never forget that immigrants, asylum seekers, refugees, those different than us, and those that we vehemently disagree with are human beings; we have a responsibility to care for one another as part of the human family.

We are facing the worst global displacement crisis in history. We are challenged by this reality today in refugee camps in the middle east or in camps where migrants gather in hope at our border. Pope Francis writes in Fratelli Tutti that “global society is not the sum total of different countries, but rather the communion that exists among them” 149. We are all part of the human family, the vulnerable family all over the globe, and the vulnerable family in our local reality. As members of the human family, how can we express love and solidarity with our sisters and brothers in times of crisis?

During this Advent season, as we remember Mary and Joseph searching in hope for a place of welcome, let us ask to keep our hearts open to welcome and embrace the poor and vulnerable, the refugee and the stranger, those who are different than we are and those we disagree with, those in our midst and those in our global community. Who are you going to welcome today?

Today our Jewish sisters and brothers begin the celebration of Passover as we prepare to celebrate Holy Thursday. Due to the exceptional challenges brought about by the Covid-19 pandemic, this Triduum will be like no other experience of Holy Week in our lifetime. As we shelter in place and practice physical distancing, we reconsider our spiritual practices and continue to find creative ways to reflect, pray and make these days holy as we continue to be church.

I am attaching some appropriate prayers for you that might help you celebrate these holiest days.

A Prayer in a Time of Pandemic

Stations of the Cross: Overcoming Racism

On the 40th Anniversary of the Assassination of Archbishop Oscar Romero 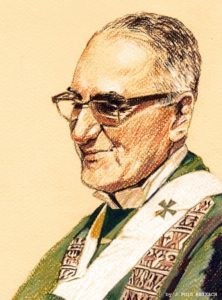 “I don’t believe in death without resurrection.”
– St. Oscar Romero

It is a strange new world. Almost every story on National Public Radio is about the pandemic and the medical, economic, and social problems it creates. As I reflect by the window in week two of the “shelter in place” order in the Bay Area that is now extended throughout the state and most of the nation, the trash truck collects the garbage at the apartment complex across the street. While many are out of work or working from home because of social distancing, trash and recycling companies are probably busier than usual because more people are staying at home. Obviously, doctors, nurses, medical personnel, and first responders are the busiest as they try to make less work for another group who are busier than usual, morticians and gravediggers.

So, on the 40th anniversary of the assassination of Archbishop Oscar Romero, it is good to remember that we don’t believe in death without resurrection.

A virus of violence killed St. Oscar. Before this pandemic took hold of the world, we had an epidemic of gun violence in this country; a pandemic of oppression and injustice especially toward refugees and immigrants. Romero was killed because he became a voice against the virus of violence that claimed the lives of the poor in El Salvador.

He was denied canonization for years because there were those who felt his death was caused for political reasons rather than rooted in the gospel nonviolence of Jesus. The church finally recognized that when the rule of law in a country is unjust and the poor are being persecuted, the Sermon on the Mount and the witness of Jesus becomes political. Fidelity to gospel nonviolence leads to the cross stained with the precious blood of Christ.

Forty years ago, Archbishop Romero’s blood poured out upon the altar where he was celebrating Mass, martyred for living his faith and giving voice to the cries of the poor. “They can kill me,” he said, “but they cannot kill the voice of justice.”

Now the focus of the nation and the world is on the corona virus as it should be. But the virus of violence will continue unless those who are rooted in gospel values raise their voices against the culture of hate, indifference, and death.

As with other crises we have faced, we are at our best when the news of the world is the worst. The hashtag now is “alone together”—though we are sheltering in place and staying at home, there is a sense of solidarity that we are all in this together. May it also be so in attacking the virus of violence.

As we meet in prayer across the miles, St. Oscar Romero, pray for us.

This is a test post for Peace & Justice Reflections