Taking Nothing For Granted 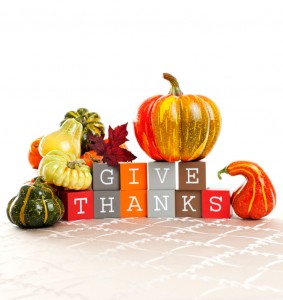 For each new morning with its light,
For rest and shelter of the night,
For health and food, for love and friends,
For everything Thy goodness sends.
Ralph Waldo Emerson

It is fitting that Thanksgiving Day is primarily a family feast because where did most of us first learn to say, “Thank You,” but from our parents? When we were children and someone would give us a gift, Mom would often prompt us with words like, “Now what do you say?”
Recently, I received a letter from someone who has who has attended several retreats I’ve offered over the years. She is most faithful in writing and often her letters are rather long. I admire and appreciate the time it takes to write a letter in long hand. She wrote how busy her life has been and then she asked if I had received the money she sent. I hurriedly went through a stack of letters that I had not responded to and sure enough, a twenty dollar bill fell from a letter she sent me in September that arrived while I was in Tanzania. I recall reading the letter when I returned from the trip, but had simply put the twenty back in the envelope.
In her most recent letter, she said she didn’t expect a thank you, but was concerned that I never received the letter and the money. I was embarrassed that I had not sent her a thank you note. I believe that she didn’t expect or want a thank you but simply an acknowledgement that I had received her gift.
In the same way, Jesus did not necessarily want or expect all the lepers he cured to return to thank him (Luke 17, 11-19). Maybe all he wanted was the acknowledgement that they were indeed healed; that they had received the gift. Evidently, nine out of the ten lepers did not have parents who prompted their children to always say thank you for gifts received. That doesn’t mean that nine out of ten lepers were not grateful for being healed. They were so excited that for the first time in months and even years they could kiss their wives and hug their children and come to the table in the company of family and friends that they couldn’t wait to see them. They would write Jesus a “Thank You” note later. But at the moment of their healing, they wanted to be with people they loved the most.
Only the Samaritan, the outsider, returned to render thanks. Now maybe he was brought up by his parents to say “Thank You” for anything from a minor gift to a major healing. Or maybe because he was an outcast, a person on the margins, accustomed to suffering, he took nothing for granted. He lived every day with a spirit of gratitude. To paraphrase the great Catholic author, G.K. Chesterton, most of us “spend our lives taking things for granted than receiving things with gratitude.” There is a sense of entitlement that can pervade our posture.
As we gather around the table of our Thanksgiving feast in the company of family and friends, may we commit ourselves to living each day with a grateful heart. You can tell people who live life from a grateful heart: they have joy written all over their faces. As Chesterton observed how many people of faith say grace before meals, he said. “I say grace before the concert and the opera, and grace before the play and the pantomime, and grace before I open a book, and grace before sketching, painting, swimming, fencing, boxing, walking, playing, dancing, and grace before I dip the pen in ink.”
This seems to the best way to celebrate Thanksgiving: by living a life filled with gratitude and taking each other and all the daily gifts we receive less for granted. When we do, Chesterton said, we “can transform common days into thanksgivings, turn routine jobs into joy, and change ordinary opportunities into blessings.”
Happy Thanksgiving!
With Peace,
Joe Nassal, C.PP.S.
Provincial Director
For the Leadership Team