St. Gaspar, a Child of the Magi 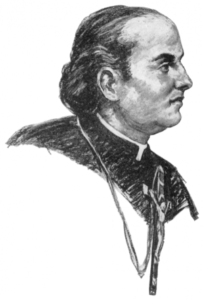 As we celebrate the feast day of our founder, St. Gaspar del Bufalo, the Missionaries in this country do so, for the first time, as the United States Province. That should give us a jolt of energy, since this is our invitation to rebirth, our time of renewal. And our founder was all about renewal, revival and reveling in the Precious Blood of Jesus Christ.

Ever since our founding Assembly in June 2022, I keep returning to the image of St. Gaspar as a “child of the Epiphany,” born on that feast day, and continue to contemplate what implications this could possibly have for us as we live out our commitments and covenants to the Congregation and the mission of St. Gaspar for our times.

What a glorious feast of the Church on which to be born, even if it did mean he had to bear the heavy burden of the strange names his parents bestowed upon him, Gaspar Melchior Balthazar del Bufalo Gaspar carried not only the traditional names of the Magi, but he inherited their questing spirit, their vivid imagination, their fearlessness in the face of a grueling journey, and the wonder that they displayed upon finding the incarnate Son of God.

But as much as St. Gaspar embodied the qualities of the Magi, he was not only a “child of the Magi,” but also a “child of the Shepherds.” While the Magi brought their exotic element to the wonder of the Incarnation, they were not the first witnesses to the Word Made Flesh. It was to the working, poor, unwelcome mundane shepherds that the invitation to come and worship was first proclaimed—not by a star, but rather by an angelic chorus.

And yet, these two sets of people, and what they represent in the Gospels, hold one thing in common—something important to our founder. Both the Magi and shepherds lived on the fringes of the society and culture into which the divine was incarnated. And this reality also finds its way into the heart, soul and zeal of St. Gaspar.

St. Gaspar leaves us the task of also embodying a life on the fringes, a life reaching out beyond the rigid boundaries so many want to create in our day—a mission that not only looks to the stars for big and bold dreams, but also a mission that has its feet firmly planted on the ground where the less than exotic needs of our brothers and sisters still cry out for the Word Made Flesh.

As a child of the Magi, St. Gaspar truly lived the meaning of the great feast of the Epiphany—recognizing the divine presence, especially in the Blood of Christ, dwelling within our world and us. And he not merely recognized it but responded to that revelation by offering his unique gifts for the renewal of God’s people.

May we honor our founder today and each day going forward by doing the same!

Fr. Ben Berinti, C.PP.S., is a provincial councilor with the United States Province. An author, preacher and pastor, he is in ministry in Melbourne Beach, Fla.