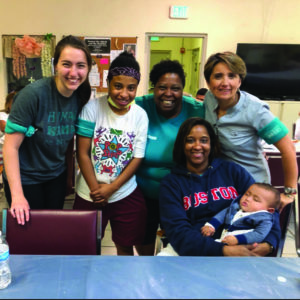 My life is dramatically different now than when I was a Precious Blood volunteer. I moved from my hometown of Chicago to Washington, D.C. I have two roommates who are in their 20s, instead of three Precious Blood sisters who were…not. I am saving money instead of trying (and failing) to live on a stipend. And I work at Catholic Charities as a Volunteer Coordinator, a role that requires many hours behind a computer, instead of the days at PBMR running from one person (and crisis) to the next.

Despite these dramatic differences, I think about my year as a Precious Blood Volunteer at Precious Blood Ministry of Reconciliation every day. Maybe it’s because I have only been gone for 16 months, but I have a feeling that my volunteer year will continue to influence the life I create for myself. I can already see its effect on my life in D.C.

Potentially the most annoying impact of my volunteer year is that I overthink everything. I can’t do simple things without analyzing the social justice implications of the decision. For example, when I walk down the streets of the Georgetown neighborhood, I don’t just enjoy the adorable row houses and beautiful gardens. No, instead the beauty of the neighborhood makes me think about the racist and classist tactics that have gentrified and insulated the neighborhood and made it unaffordable for middle- and low-income folks. Precious Blood Volunteers and PBMR woke me up to the injustices that I had been complicit in for 23 years. Now, I see these everywhere I go.

My experiences as a Precious Blood Volunteer have also made me more intentional about being a part of a community. Knowing so many folks in the Back of the Yards neighborhood during my volunteer year and seeing them when I went to the grocery store or drove down the block was a wonderful feeling. I’ve been working to create that here, but with mixed results. I started by aggressively saying hi to people in the elevator in my building, even when they awkwardly smiled and looked down at their phones—East Coast people are weird—and trying to make friends with the cashiers at the grocery store. When those tactics didn’t work, my roommates and I started a book club to get to know more of our neighbors, and now we have seven members! My friend and I are determined to keep open the new local bookstore by giving everyone we know books for Christmas. I’ve also joined the Silver Spring Candid Conversations group to talk about race and racism with other community members. My experiences as a volunteer have made it impossible to see myself as just an individual; I am constantly trying to build more community around me because I realize that’s where I am happiest.

Another impactful change from my volunteer year that I have brought with me to my life in D.C. is my new understanding of racism and white supremacy and the role I play in that system. I learned about this and wrote about as a Precious Blood Volunteer, and I knew I needed to try to continue to learn about it, even as I moved away. I joined Showing Up for Racial Justice DC (SURJ), a group of predominately white people who are organizing for anti-racist communities by educating other white people and supporting people of color-led movements like Black Lives Matter. SURJ continues to push me to be more anti-racist and to more fully live out my values. I’ve also been a part of a group at work that is pushing for an equity and inclusion initiative to make sure all people’s voices are heard, respected, and valued in our workplace, particularly those that have been historically marginalized. This new lens spurred me to go to the Texas-Mexico border in June and support the migrant families that were being released from immigration prisons to the Catholic Charities of Laredo Shelter. Racism is not something I can witness or hear about and just feel bad about anymore. I saw the effects of this widespread, insidious system on the young women I worked with and befriended in Chicago and I feel compelled to work with others to dismantle that system.

My life looks different than it did 16 months ago. I have a new home, a new city, a new community, and a new job. But every part of my life has been and will continue to be shaped by the people, experiences, and lessons I had as a Precious Blood Volunteer. And while it might be less annoying to live in ignorant bliss, I am grateful that my experiences in Chicago are sticking with me and helping me live a life that is more authentically in line with who I want to be.