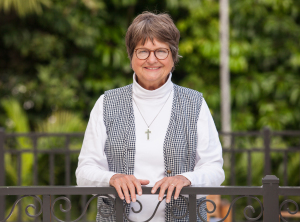 March 7, 2015
St. Francis Xavier Church
2618 Seneca Street Saint Joseph, MO 64507
9am to 3pm
Luncheon included
Contact: Br. Daryl Charron, C.PP.S., daryl.charron@yahoo.com or 816-835-0344
We are expecting a big crowd! Register now!
Sr. Helen is a southern storyteller.  She brings you on a journey during her talk about how she got involved with the Ministry Against the Death Penalty.  Her stories are about many special people she has met along the way.  She is passionate about the mission of getting rid of the Death Penalty because she has witnessed and accompanied 6 men to their execution.  There is no dignity or justice in this punishment.
Sister Helen is a member of the Congregation of St. Joseph.  She spent her first years with the Sisters teaching religion to junior high school students.  Realizing that being on the side of poor people is an essential part of the Gospel she moved into the St. Thomas Housing Project in New Orleans and began working at Hope House from 1981 – 1984.
She is the author of Dead Man Walking: An Eyewitness Account of the Death Penalty in the United States.  It became a movie, an opera and a play for high schools and colleges.
Since 1984, Sister Helen has divided her time between educating citizens about the death penalty and counseling individual death row prisoners.  She has accompanied six men to their deaths.  In doing so, she began to suspect that some of those executed were not guilty.
This realization inspired her second book, The Death of Innocents: An Eyewitness Account of Wrongful Executions, which was released by Random House in December of 2004.
Sr. Helen is presently at work on another book – River of Fire: My Spiritual Journey.