Prayer and Fasting for Peace in Syria 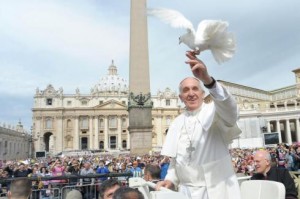 Tomorrow, September 7, Pope Francis has invited the world to pray and fast for a peaceful resolution of the conflict in Syria. As the rhetoric of war once again dominates national debate and international conversation, our Holy Father invites us to step back from the brink of war, to cease the language of military strikes and enter into the silence of our hearts to pray for peace. Whatever our plans may be for Saturday, may we find some time to meet in prayer across the miles as we hold the people of Syria in our hearts and pray for peace.
Pax Christi USA, the national Catholic peace movement, encourages all of us to join Pope Francis’ call for prayer while also calling on our senators and representatives “to support strong, multi-lateral diplomacy through the United Nations to bring all parties and regional actors to the table to negotiate a ceasefire and lasting solution to the conflict.” As Pax Christi notes, U.S. military strikes against Syria “will only bring further loss of life.” In its statement opposing U.S. military action, Pax Christi calls on the United Nations “to protect the Syrian community, stop the flow of arms to all sides, and uphold the ban on chemical weapons, without escalating the violence.” (Read the Pax Christi statement here.)
A local chapter of Pax Christi USA is being formed in Liberty. This Sunday, join Brother Daryl Charron, chair of our Justice and Peace Committee, and several others who will be meeting from 2:00-4:00 PM at Precious Blood Center to discuss establishing a Pax Christi Chapter for the Kansas City area.
For a clear and concise case against attacking Syria, read Dan Ebener’s column online in The Catholic Messenger. Mr. Ebener offers seven reasons drawn from Catholic Social Teaching (just cause, legitimate authority, probability of success, proportionality, discrimination, last resort, and option for the poor) why the proposed U.S. military attacks against Syria should be opposed. “An attack on Syria could worsen the situation for millions of Syrian refugees,” Mr. Ebener writes. “Funding that would be used for a military attack could be re-directed toward humanitarian assistance.”
I will meet you in prayer and fasting this Saturday, September 7.