Meditations for the Year of Mercy: The Fire Inside 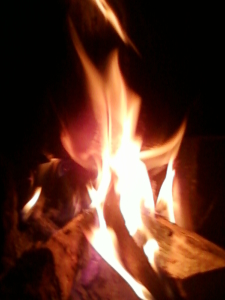 By AswiniKP (Own work) [CC BY-SA 3.0 (http://creativecommons.org/licenses/by-sa/3.0)], via Wikimedia Commons

by Fr. Joe Nassal, C.PP.S., Provincial Director
Several years ago at a retreat, a woman described how the death of her brother burned a hole in her soul. When he died, she thought she would find comfort and consolation in her faith but just the opposite happened. Her faith died inside of her and she left the church for several years. She wasn’t pushed away. She didn’t say anything negative about the church or the priest or the people at the time her brother died. She just felt numb inside.
It was confusing for her and she didn’t understand her reaction until she heard the reading from Isaiah that we read this Sunday (Isaiah 6, 1-8). Notice the imagery: the altar is on fire. She imaged God as a living fire and when her brother died, she did not want to stand too close to the fire. Rather than experiencing the fire of God’s love as a comforting presence, her brother’s death was like a raging fire that burned her to the core, consuming her hope and leaving her faith in ashes.
She had to walk away from the altar, from the church, and from her faith for a while. She returned to church a few years before I met her, but Isaiah’s experience at the altar gave her a language to speak about her brother’s death. “The advice we learn as children, ‘Don’t stand too close to the fire,’ is wise and good,” she said. “But when what is on fire is God, then we are to get as close to the fire as we possibly can.”
But this is dangerous because when we get close to God, we may get burned.
In both our first reading and gospel this weekend, Isaiah and Peter get burned from getting too close to the fire of God’s love. Both have similar responses. When the prophet Isaiah experiences God’s revealing presence in the blazing altar, he says, “Woe is me! I am a man of unclean lips living among a people of unclean lips!” He recognizes his sin, his unworthiness. Peter’s response is the same after the miraculous catch of fish, “Depart from me, O God, for I am a sinful man.” Jesus does not depart, of course, but rather invites Peter into a deeper relationship as he calls him to follow him.
Pope Francis calls Jesus the mercy of God: “In Jesus of Nazareth, mercy has become living and visible. Jesus’ entire life and his person is nothing but love, a love given gratuitously.” That woman I met at the mission was afraid to get too close to the fire of God’s love and mercy because she was afraid she might get burned. Each of us deals with fears great and small as we seek to live out our call to follow Jesus. Our readings on this last Sunday before Ash Wednesday remind us that Isaiah and Peter had reservations and fears about answering God’s call because of their sin. But because their encounter with the fire of God’s mercy and love, they were able to embrace their prophetic call and warm the world with truth, justice, and grace.[/fusion_builder_column][/fusion_builder_row][/fusion_builder_container]