When I looked at the Precious Blood Volunteer Program application in January 2013, it was like no other application I ever came across. The questions were more about who I am as a person than how good I look on my resume. By completing the application, I got to know myself more, and I knew that if I got accepted to the placement in Crownpoint, NM, I would be spending a summer getting to know myself more in a different light. 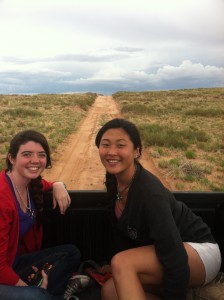 In June, I met for the first time Kara McNamara, the fellow volunteer who was also to be placed in Crownpoint, at O’Hare in Chicago. We shared the same flight to Kansas City. When we landed, we were greeted by a grinning Tim Deveney to take us to Precious Blood Center for our weeklong orientation.

Orientation was inspiring. Not inspiring as in motivating, but the literal meaning of inspiring as “breathing life into.” I met many wonderful Precious Blood affiliates with wisdom and stories to share. While I was learning about Precious Blood Spirituality, I was also seeing the spirituality come to life throughout my week in Kansas City. Everyone that works at the center or came through were so generous with their time and had such good intentions for all of the volunteers. Throughout the week, Kara and I were told from people who had been there that we were in for a treat when we get to Crownpoint—but no one could fully describe it to us.

Following orientation we flew to Albuquerque, NM, where Kara and I were greeted by Srs. Michelle and Maureen with open arms. Following our two-hour drive out to Crownpoint, we arrived at the sisters’ house and walked into a farewell party for one of the Teach For America members. The party was a good way to expose us to the community, as well as being a lesson that we learned quickly, namely, that life never stops in Crownpoint.

Trying to describe Crownpoint on paper is extremely challenging, and I now totally understand why no one could describe it to me. It’s hard to describe because there’s no such thing as a ‘typical’ or ‘normal’ day. We woke up each morning and only then would we find out what we were doing for the day. It didn’t seem like anyone needed to carry a planner. Kara and I filled in a lot of gaps and did whatever was needed at the moment. I could now add all of the following to my resume: statistics/organic chemistry tutor, teacher’s assistant to a writing course, painter, mover, vacation bible school helper, cook.

I got to hang out with a Nurse Practitioner while there—one of the best connections I ever made. I knew I wanted to be in the medical field, but I just didn’t know what route to take. The way the information was presented to me from this nurse practitioner was inspiring—and different from the way any other nurse practitioner described their occupation. It was the first window into my future and I loved every second of being at Crownpoint Hospital.

I’ll remind you that Kara and I both grew up in Illinois and both attended undergraduate school in the Midwest. That being said, any type of elevation in the landscape was exciting for us (even the hills of Kansas City were fun). The novelty never wore off for me, and it was humorous to citizens of the reservation, because it was just so normal for them. When Kara and I stood at the bottom of each canyon we visited and looked up, it always seemed daunting and almost impossible, but we were always up for a challenge.

We got to spend a weekend in Tuba City with a Navajo family that was so generous to open their home up for us. Tuba City is about 60 miles away from the Grand Canyon, so even that landscape was different. We participated in making a Navajo cake. Every step had a meaning to it, which was explained fully by one of the family members. Prayer and spirituality is so important to the Navajos, and for them to invite us in seemed an act of generous hospitality.

Going to Tuba City was the first time I really felt culture shock. The juxtaposition of modern life and a traditional life blended so well together for them. Not only was I craving to learn more about this culture, but it also sparked a new curiosity in me for learning about Korean culture. Growing up as a first-generation Korean-American, I never fully appreciated Korean culture, since I spent so much effort trying to assimilate U.S. culture. I didn’t understand why my parents wanted me to participate in it until I got to visit with this Navajo family. They were leading a progressive life with the lessons of their ancestors. It was the first time I really understood that uniqueness makes you beautiful.
When I first went to college, I somewhat lost. I didn’t know who I was, who I wanted to become, or where God stood in my life anymore. Everything was changing, and on top of that, I was supposed to pick a career path for the next 50 years at the ripe age of 18. I felt like I was standing at the bottom of a canyon, but instead of looking at the climb as doable, it seemed physically impossible. As each day of college came, a new step up appeared in my journey.

At the end of my summer in Crownpoint, I finally looked down into the canyon and saw all the progress I made from that first day in college. Everybody I met through this journey helped me figure out the world I was living in and who I want to become. Thank you to everyone I met in Kansas City and Crownpoint for giving me hope and confidence that I lost somewhere along the way. Finding those two lights again felt like I was given mental CPR. You all have truly once again inspired me. 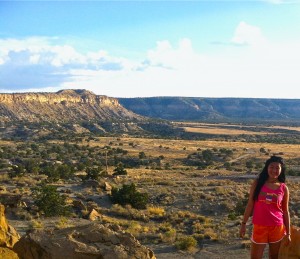 Leah Yeo in front of the mesas that surround Crownpoint

My mom told me that every step in life prepares you for the next chapter in life and to take everything as a learning experience. My experience in Crownpoint taught me some life lessons: 1) Mom is always right, so write down everything she says, because it will be useful later in life, even though it doesn’t seem like it at the moment. 2) You make your own fun. Kara and I weren’t expecting to do so much painting, but we played Disney songs throughout the entire paint job, which sparked more conversations about our childhood. 3) History books that are published by the U.S. are completely biased. I got the Navajo side of U.S. history, which is—in my opinion—far more interesting than the version I got from school. 4) Look into the future with lessons from the past. Navajos are so in touch with their own history and try to bring that along as the world innovates. 5) Listen with an open heart and mind. I was surprised at how many thank yous I received after just listening to someone. People just want to be heard.
My experience in Crownpoint accurately reflected the application process. It was part of a journey into who I’m going to be in this world as a person and in my occupation. I can’t wait to see how Crownpoint works its magic.

Leah Yeo is a student at the University of Illinois at Urbana-Champaign. She served as a Precious Blood Volunteer in Crownpoint, New Mexico on the Navajo Nation in the summer of 2013.