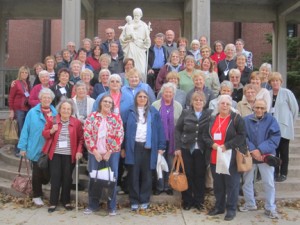 Companions from the Kansas City Province gathered for their annual retreat on October 19-20, 2013 at Conception Abbey in Conception, MO. Virginia Miller, a Companion from Liberty, MO shares some of her reflections on the event.
“Fr. Jerry Stack, C.PP.S., an historian, was our presenter on St. Gaspar. His focus was St. Gaspar’s relationship with the laity. He spoke of his charism through Spirituality, Community and Mission. His spirituality developed from his pious parents and Ignation spirituality, but especially during his exile where he met Francis Albertini who later became his spiritual director. For myself, I use his exile as inspiration, because even in prison he continued celebrating Mass in his cell and visited other prisoners, spreading his message of redemption for all—despite his failing health. During his missions he always included everyone—even visiting homes, the sick, the poor and those in prison. He wanted them to know of Jesus’ redeeming blood for everyone through his crucifixion.
Gaspar’s idea for the laity was to develop their own spirituality, but also to work with others to teach them and work in service to others. In the Confraternity of the Precious Blood which he took part in as his time permitted, there was a group of women called Daughters of Charity that maintained a linen chest to supply the sick with bed linens. In our large group sharing it was very humbling and with pride that I heard of all the many ways our Companions are involved in ministry with Hospice, visiting the sick and those in prison, working with the elderly and as nurses. One is even working with children in daycare whose parents are the working poor. Without preaching it she can teach them how to play together without violence, but with love and not abuse.”
As members and companions of the Precious Blood Companions, thank you Fr. Jerry for spurring us on with insights gained from the life of our founder.[/fusion_builder_column][/fusion_builder_row][/fusion_builder_container]