A Note: Fr. Joe is going to take a break from posting his homilies, as he is beginning to do some retreat ministry (via Zoom!). We wish him well as he works on his ministry and look forward to his return to sharing his homilies with us!

Last Saturday afternoon, I was headed out for a walk toward downtown Berkeley which is about a mile from our house. From there I go up the hill to the campus of the University of California which has many wide-open spaces for social distancing and steep enough hills for a member of the Medicare card carrying contingent. But as I walked down our street, I noticed a larger than the usual number of people walking back from downtown. And several of them were carrying signs. They were mainly high school and college-aged students who had just finished a protest rally and sit-in at the Berkeley Police Department where they had sat or stood in silence for 8 minutes and 46 seconds, the length of time the white police officer kept his knee on the neck of George Floyd.

Then, I heard the music and looked down a side street to see a block west of us, a large crowd was marching and singing and dancing down Martin Luther King Drive toward downtown. I wandered over to them and joined them as we walked toward the Civic Center Park in downtown Berkeley. The signs that have now become familiar — “Black Lives Matter,” “Remember Their Names” and “No Justice, No Peace” bobbed up and down along the boulevard. Many of the people who lived along Martin Luther King Drive came out on their porches with signs of their own supporting the Black Lives Matter movement. 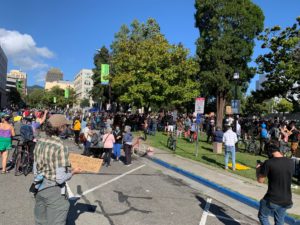 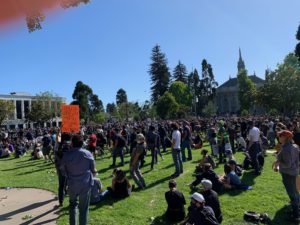 More procession or parade than a protest march, the mood of the crowd which police estimated as between 3-4,000 was committed but not angry and certainly not destructive. The procession was led by a New Orleans-style jazz band and several of the people marching were playing instruments. Since I joined the procession in the middle, I wasn’t aware until later that it was patterned after the Second Line Parades in the French Quarter of New Orleans, which has a long tradition in the African American community. The procession was led by pallbearers carrying a wood coffin as the march symbolized the desire to “bury” racism forever.

As the large crowd listened to a series of speakers, from the mayor of Berkeley and various members of the city council, and represented from various social justice organizations, another large protest march came down Center Street from the campus. They were chanting a litany as the leader in the back of a pick-up truck shouted through the megaphone the first name of a victim of police brutality or racism and the crowd responded with the last name. Soon this group merged into the crowd already gathered in the park and its leaders, mostly young black men, joined the political leaders on stage. They were welcomed with loud cheers and raised fists of solidarity and signs raised high to the bright blue sky.

Soon, the leaders of this second group took over the microphone and led the crowd in chants to give witness to Black Lives Matter. It was all very peaceful and Berkeley police joined the crowd acknowledging the need for a radical transformation in our society.

Taking to the Streets 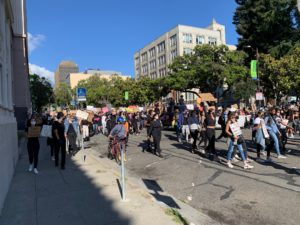 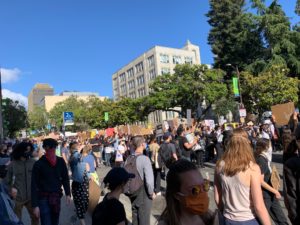 Though the songs were different and most of the people marching wore masks in recognition that we are still in the midst of a pandemic and tried to keep some semblance of social distancing, the procession took me back to the Corpus Christi processions when I was in grade school at St. Mary’s Church in Bridgeton. It was always an honor to be chosen to be one of the servers, especially the acolyte who carried the censor and filling the church and neighborhood with the sweet smell of incense. Although I do remember one year when one of my classmates chosen to be the thurifer was overcome with the smoke and fainted. But another server with quickness and precision, picked up the thurible like a soldier picking up the flag from a fallen comrade and the procession did not miss a beat. Others stepped out of line in order to attend to the fallen acolyte but it was clear the procession must go on as the focus of the procession was on the Blessed Sacrament, the Body of Christ being carried out of the church and into the streets by the priest clad in cassock, cope, and humeral veil.

Churches here in the Bay Area will be opening up this Sunday with limited numbers able to attend Mass. The bishops also encouraged those who wish to have Corpus Christi processions provided social distancing was strictly observed and everyone wore masks. But I feel I already attended a Corpus Christi procession last week in Berkeley. For isn’t this the point: to take the body and blood of Christ out of our sanctuaries and into the streets to give witness to Eucharist as the source and summit of our lives?

These past several months as we have sheltered in place, many have felt what today’s first reading from Deuteronomy reflects. “He therefore let you be inflicted by hunger, and then fed you with manna…in order to show you that not by bread alone does one live, but by every word that comes forth from the mouth of God.” Like our ancestors in faith, we have been “inflicted by hunger” for the Body and Blood of Christ and now those who are able will once again be fed with the body of Christ, our manna from heaven. But this time sheltering in place has also offered us an opportunity to feast and be nourished on the word of God; to chew on it and digest it and allow it to give us strength during these trying times.

Our second reading for this feast, from Paul’s first letter to the Corinthians, captures the reality about the Eucharist that we are not spectators in some spiritual play but active participants in bringing the body and blood of Christ to the world. “The cup of blessing which we bless” calls forth our “participation in the blood of Christ.” The bread we break, Paul says, invites us to participate in the body of Christ. And though we are many, “we are one body.”

This was my sense last Saturday, especially after the two protest marches merged at the Civic Center Park. There was no tension or conflict but a sense of celebration that we are one in our calling for a change in our hearts and in our society’s systemic racism.

Active Participation in the Mission

This feast of Corpus Christi always brings to mind that scene at the end of The Mission, a 1980s film about the exploitation and oppression of native peoples. Jeremy Irons, playing the role of one of the Jesuit missionaries, carries the Blessed Sacrament out of the church and into the violence perpetrated by the mercenaries who are oppressing the native peoples. As the people with whom he served and with whom he will die are being slaughtered around him, he carries the Body and Blood of Christ out of the chapel into the violence as a sign of peace, a sign of hope, a sign of contradiction to the murder and mayhem around him.

This is what this feast means for our world today. It is a procession of passion for justice, for peace, for reconciliation. We take our belief and reverence for the Body and Blood of Christ out of churches and places of worship out into the streets. There as we take a knee or bow low to the Body and Blood of Christ we recognize in the poor, the hungry, the victim of racism, the depressed, the weary, the wounded, the aged, the lonely, the fearful and the forgotten.

As today’s gospel reminds us, “Whoever eats my flesh and drinks my blood remains in me and I in them.” When we remain in Christ, we are faithful to our call, the call to become the body and blood of Christ for the life of the world. That is what our “Amen” voices when we receive the Eucharist. Though because of Covid-19, we can’t drink from the cup, we still are the blood of Christ, the life-force inside the chalice. Active participation in the blood of Christ implies not only drinking from the cup but dancing in the streets, inebriated by equality and life, outraged by injustice, and propelled by a passion to bring about God’s realm of justice, peace, truth, and love.

When we remain in Christ, we are committed to being the living memory of God’s love in good and glorious times and difficult and dangerous ones and active participants in the life of the world. On this feast of the Body and Blood of Christ, may we recommit ourselves to be passionate participants in the prophetic procession of the Body and Blood of Christ that takes us out of the sanctuary and into the streets to stand in solidarity with all those seeking justice.