Abundance Fills the Soul When Excess Is Stripped Away 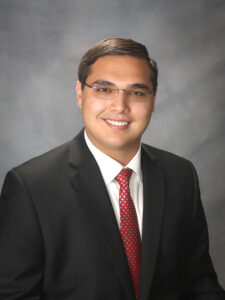 I called her name. She rose slowly from her chair in the waiting room and hobbled toward me. She gifted me an enthusiastic greeting and a labored smile, that which is socially expected for decency. We entered the exam room, and I initiated the pre-provider tasks: taking vitals, gathering medical and family histories, conducting necessary point-of-care testing, etc.

Clearly, something deeper ailed my patient. I asked about her day, her holiday plans, her family. I found out the upcoming Thanksgiving would be difficult for her—the first one since losing her daughter. I asked about her daughter. I experienced my sister in Christ’s delight in sharing the memories of someone she loved so dearly. She showed me a beautiful, goofy video of her with her daughter—singing, dancing, and laughing. She teared up, a paradoxical moment of sadness and joy. Her heart was broken; from it oozed the Precious Blood, a combination of both suffering and pure love. 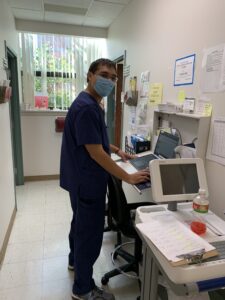 Small drops of blood discolored the white floor. The patient had stepped on a nail in his garage, leaving a small, deep hole in his foot. I cleaned and wrapped the wound, yet this man had little concern for his foot.

He feared for his mind. He told me he wasn’t right—that something was wrong with his brain, that he was “messed up” in the head. He told me he’d done many drugs and other substances. He’d seen psychiatrists and been given many medications meant to help. None of them worked. He told me he would try one more thing, and if that didn’t work, he had “other arrangements” to take care of it.

It was 2:30 on a warm Saturday afternoon. I was driving home with two friends along Independence Avenue, a busy road in Northeast Kansas City. On a patch of grass between the sidewalk and the road was a body—just yards from my residence.

I didn’t see it initially, but my friend insisted we return to check. People walked along the sidewalk, past the body. Several cars passed. From a distance, I got a better view of the man. His hat was thrown to the side, his body disheveled and uncomfortably positioned. One arm was raised and yellow. It was clear my brother in Christ was not breathing.

As we approached, a lady called out from a car to inform us she had called 911. Later, she revealed she had driven by 20 minutes prior, on a delivery. She was appalled by the indifference of hundreds of people who must have witnessed a man unwell on the side of the road. A life had passed—and nobody cared to notice.

thud, thud, thud, thud, thud! It was midnight. I awoke to a cacophonous banging on our door and windows. We answered. Our neighbor frantically reported the house next to ours was on fire. We raced to the other window to witness the entire west side of the building engulfed in flames.

These are but four brief stories among hundreds I’ve experienced working at the KC CARE Health Center in midtown and living in Northeast Kansas City. Interestingly, a few similar connections underly each of these stories and the many others that remain untold.

First, socioeconomic and racial barriers underpin each situation—access to health care, racism and discrimination, mental health stigmas, or scummy landlords who neglect their responsibility to respond to electrical issues. These injustices fall harder on minorities and those with less money.

Second, suffering seems to be part of the human condition. There is nothing the individuals in these stories could have done to prevent their hardship. I don’t say this ignoring the role of free will. Yes, each individual may have made choices that contributed to their situations, but the options they had available were severely screened by culture and society, among several other determinants.

Finally, God is present deeply with those who suffer. These are truths we recognize profoundly in the spirituality of the Precious Blood.

CS Lewis affirmed that heaven is an acquired taste. Jesus is my savior, and it is by His doings—not my own—that I will experience eternal life in union with God. Yet, if you were to bring me to heaven right now, I do not know if I’d like it. I still carry the taste of the world with me: pride, independence, self-servitude, sin. This contrasts with the purity and fullness of love that is heaven. However, through service and the experiences like those shared above, I’ve begun to acquire the taste of Christ. Community, simplicity, and prayer also have been formative for me during the past year.

I’ve practiced community on two levels this year: directly with those with whom I live and also with the global community.

I live with 18 others, including two families with five children, and sharing life with them has been a beautiful joy. I experience this joy in the form of sharing meals, interests, events, and time. I have countless jubilant memories such as tennis, basketball, soccer, football, Frisbee, ice skating (I love sports), faith sharing, music, etc.

In terms of the wider community, we focus on conservation, being involved in neighborhood and city policies, and living on a smaller income. Some of the practical aspects of this lifestyle are eating a vegetarian diet, consuming less water and electricity, composting, using a clothesline, paying attention to consumables and reusing when appropriate, and purchasing natural organic local products when available. There is a richness to sharing resources and life in this way. 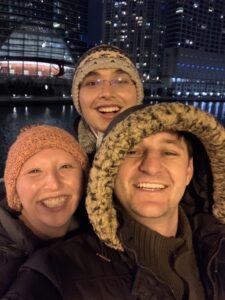 Aaron with his fellow Precious Blood Volunteers in Chicago

Simplicity is a challenging ideal when we live in a chaotic world. Despite this, I still have been able to find simplicity relative to my previous student lifestyle. I live in a house without Wi-Fi and a phone signal because I strive to remove unnecessary and empty lifestyle choices. Often when we think about simplicity, we focus on what we “give up” and an image of emptiness is invoked. In practice, it is quite the opposite! Removing the superficial and unimportant gives way to a spirit of great abundance—especially in time, relationships and charity.

Finally, prayer is the cornerstone that links everything. My relationship with God has strengthened me to participate and grow in all the ways discussed and also has been strengthened through my experiences. Daily Mass is a joyous gift and receiving the Eucharist has been fuller and more transformative through walking with others as a Precious Blood volunteer.

This year has been formative as I’ve taken little steps along a lifelong journey to acquire the taste of heaven. I invite all of you to join in along the way. As echoed at Jerusalem Farm: The way is long, let us walk together; the way is hard, let us help one another; the way is Christ, Christ is the way.