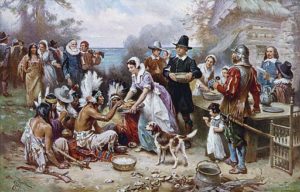 “The First Thanksgiving, 1621” was painted by Jean Leon Jerome Ferris between 1912 and 1915. Historians note that the scene depicted here is not historically accurate. The clothing worn by the Pilgrims is incorrect, the Wampanoag did not wear feathered war bonnets, nor would they have been sitting on the ground.

A teacher who was a guest on a National Public Radio show on November 24th described a scene I could remember from my childhood and my children’s elementary days too. Michelle Portera, an 18-year veteran teacher described how she used to celebrate Thanksgiving in her first-grade classrooms:

You make the Native American headdress, and you make a medallion with your Native American name on it and put beads on your shirt and make all those fun things — and the turkey activities. And then you would have a day where you dressed as pilgrims and Native Americans.

I vividly recall making those construction paper pilgrim hats and Indian headdresses. I remember my children bringing home these same creations, almost as if their teachers and mine had used the same patterns. It left us with good feelings, pride even, about the founding of our nation: stalwart Pilgrims who overcome the odds, surviving and then thriving.

But as Portera continued her story on NPR’s Weekend Edition Sunday, she also admitted to a nagging feeling she couldn’t shake: “I didn’t feel like we were teaching truth.”

What most school celebrations of Thanksgiving ignore or at best gloss over is that the Pilgrims were colonizers, intent on taking land away from the Native People’s whose home this was before the landing on Plymouth Rock. In a few short years, the European newcomers would use all means available to kill Native people, up to and including giving them blankets infected by smallpox and drive them from the land. It is an ugly chapter of our national history.

The rest of the NPR program talks about how teachers are adapting their lesson plans to better reflect the reality of the roots and consequences of that first Thanksgiving.

As I was thinking about all these things, I ran across a couple of news stories about a satirical play by Native American playwright Larissa FastHorse called “The Thanksgiving Play.” The premise of the play is, as described by Los Angeles Times theater critic Charles McNulty, “Four adults [are] on a difficult progressive mission … to devise a Thanksgiving pageant for an elementary school that will pass muster with today’s unforgiving standards. … [They are] determined to pull off an unobjectionable Thanksgiving commemoration in which no animals will be slaughtered and no Native people will be demeaned.”

FastHorse, a Native American playwright whose work has challenged blind spots in America’s historical narrative and cultural presumptions, isn’t setting up straw men. The disagreements and spats among the characters reveal entrenched conflicts and prejudices that continue in a sanitized form the Pilgrims’ erasure of indigenous reality.

“The Thanksgiving Play” incorporates as interludes skits that are taken from actual lesson plans and classroom ideas for Thanksgiving activities posted by teachers on Pinterest. The casual racism, exhibited in silly songs and playful reenactments, would defy credulity were it not so deeply ingrained.

Reexamining our relationship with Native Peoples was the focus of a program, Roots of Injustice, Seeds of Hope, Precious Blood Renewal Center hosted in October. Participating in that program opened my eyes to how the dominant culture shapes – distorts – history. History, as they say, is written by the victors. The program left me with a nagging question: What can we do about this history of injustice?

Why should this matter to us? Precious Blood Father Robert Schreiter has written that a foundational task in the work of reconciliation, a key component of Precious Blood spiritualty, is the healing of memories; this is a first step toward reconstructing societies riven by violence and conflict and crucial to creating safe and hospitable spaces in which the work of reconciliation can take place.

Undoubtedly part of the healing of memories — especially when it comes to reconciling our relationships with Native Peoples — is discovering the truth of the past. Because our Thanksgiving traditions have perpetuated false narratives about our relationships, this time of year is probably an ideal time to do this.

Adults interested in a clearer history may want to look up Howard Zinn’s classic A People’s History of the United States or, a book that I recently finished by Harvard historian Jill Lepore, These Truths: A History of the United States, which has just come out in paperback. For kids, one of the teachers on the NPR show suggested these books: Jingle Dancer by Cynthia Smith, When We Were Alone by David Robertson and The Lesser Blessed by Richard Van Camp.

A good exercise for this time of year, then, is learning as much as we can about the Native People who had stewardship of the land we now occupy.

I live in Clay County, Missouri, which is also where the Precious Blood Kansas City province has been headquartered since its inception. Did you know that the official, marked Lewis and Clark Trail runs along Pleasant Valley Road, which forms the northern boundary of the Precious Blood property in Liberty?

This is what I have learned of the people who lived here before us:

The Nebo Hill archeological site near Excelsior Springs, Missouri, has revealed evidence of a culture that flourished here between 3000 and 1000 B.C. These people were the predecessors of the Kansas City Hopewell peoples who lived along what we call the Missouri and Kansas Rivers between 100 B.C. and 700 A.D.

The Hopewell peoples, living in oak and hickory forests were hunters and gatherers, but established permanent villages. They also traded extensively. Archeologists have found in Missouri sites volcanic rock from the Yellowstone, copper from Lake Superior, and shells from the Gulf Coast.

But the stewards of this land when Europeans began their migration to North America were a tribe who called themselves the Niutachi, which in their language, Chiwere-Siouan, meant “People of the River Mouth.” Because of misunderstandings and bad translations, when French traders encountered the Niutachi in the late 17th century, they dubbed them “Wemihsoori” or “Mihsoori,” roughly meaning “people of the wooden canoes.” The name stuck and the Niutachi became the Missouria. (A Catholic footnote to this story: It was the Jesuit missionary priest Jacques Marquette who recorded the name wrong.)

The Missouria were hunter-gatherers who spent time farming. Semi-nomadic, they would plant their crops — beans, corn, squash — in the spring … leave their villages to go on extended buffalo hunts throughout the summer, and return to harvest their crops in the fall. The fullness of their larders reflected the bounty of their crops, the availability of various species of nuts and fruit, and the success of the hunt.

The Missouria lived in frame dwellings of various types. Some were covered in woven reeds or rushes; others were overlaid with slabs of bark. Some of the lodges were elliptical in shape; others were round.

According to Michael Dickey, site supervisor of Arrow Rock State Historic Site, the Missouria were deeply spiritual and monotheistic, worshipping Waconda, the Earth Maker or Creator. (I found one reference that called the Creator Maun.) The clan, the extended family, was the basic societal unit. While men were polygamous, the women were allowed only a single partner. The women, however, owned the clan lodges and all the possessions therein. While they followed strict gender roles, boys and girls were equally valued in the family.

When the Niutachi and the French met, the tribe numbered some 10,000 members and dominated the territory north of the Missouri River in present-day Missouri. But by 1804 when the Niutachi, met Lewis and Clark at the outset of their Corps of Discovery Expedition, Clark referred to them as “once the most powerful nation on the Missouri River” and reported only about 400 members. Their contact with Spanish, French and American traders exposed them to infectious diseases, especially smallpox that decimated the tribe and made them vulnerable to their traditional enemies, the Sac and Fox. To survive, the Niutachi merged with their close relatives the Otoe around 1790-1800. Together they maintained their territory, but that would not last.

Settlers from the east seeking rich farmland coveted the traditional lands of the Otoe-Missouria people. They fought to keep their land, but the settlers came in multitudes. By 1855, native people and white settlers were in open warfare and the U.S. government intervened, sending troops to confine the Otoe-Missouria to the Big Blue River reservation in southeast Nebraska.

Their tribulations did not end there, however, as the history page on the Otoe-Missouria tribe’s website attests:

Life on the Big Blue Reservation was hard. The tribe was not allowed to hunt for buffalo. The government encouraged a shift from a migratory lifestyle to an agrarian one without consideration of long-established tradition or social structure. For years the tribe watched as acre by acre of their land was sold off by the government to non-Indians. They suffered as treaties were broken and food, medicine, livestock, and basic essentials were not delivered as promised. Sickness was rampant, children starved and the mortality rate climbed higher year after year. In 1881 they were moved to Red Rock, Oklahoma, where the tribe is currently located.

Theirs is the land we claim for ourselves now. What can we do about it now? FastHorse has said, “To acknowledge indigenous culture and history in this nation, we have to acknowledge complicity. And that if you’re here, you’re on stolen land, however you got here.”

If we are about the work of reconciliation, it seems to me that the first and least thing we can do is learn as much as we can about the people who walked here before us.

McNulty, Charles. “Review: The politics of Thanksgiving, served up as lukewarm satire.” https://www.latimes.com/entertainment-arts/story/2019-11-07/thanksgiving-play-geffen-playhouse-review

Peace Studies, University of Missouri. “Alternative narrative from the perspective of the Otoe and Missouria tribes” https://peacestudies.missouri.edu/di/tribes?q=di/counter

Schreiter, Robert. “Theology of Reconciliation and Peacemaking for Mission,” https://preciousbloodspirituality.org/spirituality-and-theology/preparing-missionaries-be-agents-reconciliation-and-peacemaking

Soodalter, Ron. “The Tribes of Missouri Part 1: When the Osage & Missouria Reigned” https://missourilife.com/the-tribes-of-missouri-part-1-when-the-osage-missouria-reigned/