“He who opens a school door, closes a prison.” Victor Hugo 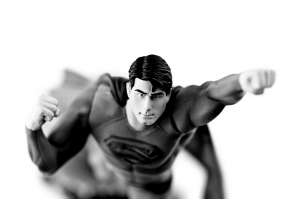 On my November visit to the Shawnee Correctional Center in Vienna, Illinois, I stayed in Metropolis, Illinois, about 30 miles from nowhere. If there are any hotels in Vienna, I didn’t find them, so off to Metropolis I drove, which proudly proclaims itself the home of Superman. After checking in, I visited the big statue of the Man of Steel in the town square, the Superman Museum, and another statue paying homage to Lois Lane. The Superman celebrated here is the 1950’s black and white television version starring George Reeves and Noel Neill, so it was fun reliving my youth. Great Caesar’s Ghost!
I don’t know why, but while I was touring this depressed town, I kept thinking of the 2010 award winning documentary Waiting for Superman, a film about the failing public school system in the United States. The film’s title is based on an interview with educator Geoffrey Canada, who grew up in poverty, where he recounts being told as a child that Superman was not real, and how he was frightened because there was nobody to save him. Investigating the failures of inner city public schools, it chronicles the stories of 5 students and their families from Harlem, in their quest to get a better education by entering a lottery for slots in a successful charter school. They are waiting for Superman.
It is at Shawnee the next day that I visited Derrion,who is also waiting for Superman. A victim of poverty and a poor Chicago public school system education,he is like many of the youth I meet who end up in prison. Fr. David Link, a Catholic Chaplain for the Department of Corrections in Indiana, said he meets so many incarcerated individuals who are there “not because they
fell into the cracks of society. These people were born in the cracks.”
Derrion was locked up at age 15, tried as an adult, and eventually pled out to 14 years. While at the Juvenile Detention Center and the Illinois youth prisons at St. Charles and Kewanee, he came within one credit of attaining his high school diploma. Since residents can stay at youth prisons until they’re 21, he could have completed high school at St. Charles. Instead, Derrion was transferred at age 18 to an adult prison, Shawnee Correctional Center, where he has to settle for a GED, not a high school diploma.
He’s been at Shawnee for over a year and he is still on the wait list for GED classes. At prisons in Illinois, priority is given to inmates with the least amount of time to serve. Although this makes sense when only a small fraction of those wanting a prison education can be accommodated, why not put more of our corrections tax dollars into education programs rather than on prison buildings and other programs designed to punish inmates? Every inmate who wants to be educated should be afforded that opportunity, which gives them a far better chance at succeeding on the outside.
In the meantime, Derrion attempts to educate himself by reading and writing poetry, which he shares with his pen pal Joan, a retired teacher. He’s still waiting for Superman.