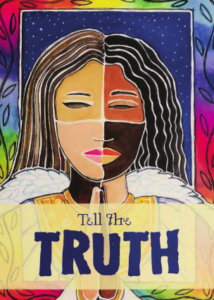 by Leah Landry, Precious Blood Volunteer
Most white people do not want to talk about race. In fact, I feel uncomfortable typing this article right now. I am so scared of saying something wrong or implying something hurtful so it would be easier to stay silent. But after Chicago Regional Organizing for Anti-Racism’s training (C-ROAR), I realize it does not matter what I want or what is easy: we have to talk about race.
I knew early on that racism existed. When I was eight years old, my brother’s best friend joined our family. Shaun is African American and I saw that he was treated differently than my Caucasian brothers in our predominately white neighborhood. I remember Shaun and me getting weird looks when we were together and the police pulling him over much more often than my white brothers. But our conversations at home were about how other people were discriminatory, never about how racism worked through us as white people. I knew I had white privilege, but I did not realize I was part of the problem.
As a year-long volunteer at Precious Blood Ministry of Reconciliation (PBMR), all my suspicions that racism ran deeper than I could articulate intensified. I see every day how people are discriminated against because of the color of their skin. In the Juvenile Temporary Detention Center, I was overwhelmed and appalled by the disproportionate number of black and brown teens my city locks up. While working at PBMR, I accompanied a young woman to court and was immediately told I could use the shorter line because the guard mistook me—the only white woman in the crowd—as a lawyer. I met young men who were given tickets for jaywalking and biking on the sidewalk while I had escaped every instance of a police stop with nothing more than a warning. I witnessed intense poverty: people struggling to pay rent, afford clothes, or feed a family, always one crisis away from losing everything. I saw all this and knew that there must be root causes, but I did not understand the depth to which racism and white supremacy created and perpetuated these circumstances.
Through the anti-racism training and researching on my own, I learned that racism is at the heart of every one of these issues. I discovered that nationwide policies of redlining forced black families into segregated neighborhoods and denied them access to the same government-backed loans that allowed my own grandparents to buy a home (“A Case for Reparations”, Ta-Nehesi Coates). I found out how the criminal justice system is designed to target, imprison, and harass people of color (The New Jim Crow, Michelle Alexander). I learned how the inequities originated: not because of something inherent or lacking in communities of color, but because of structures that intentionally privilege white people and subjugate people of color.
The hardest lesson I learned is that racism is not just the overt, stereotypical racism we immediately think of, like the KKK or the rally in Charlottesville. It is the deep-rooted racism of unconscious bias that lies within all of us, because we were all raised in a racist society. This was and still is hard to fully comprehend for me. I, in my ignorant whiteness, perpetuate racism, even though I have a black brother who I love dearly, even though I say I am committed to racial equity and justice, even though my family told me to love everyone regardless of race. I have centuries of ingrained white supremacy born into me. I was raised in a society that was built on the backs of enslaved people of color and live in a country that continues to privilege white people.
The anti-racism weekend was transformational for me. It highlighted how entrenched white supremacy is and now I cannot un-see it. The most challenging part is that now I see racism play out in me. I catch myself stereotyping, preferring white people and white practices, making myself the center in spaces of color, and poking holes in stories of discrimination and racism. One particularly poignant moment of recognizing my own racism was when a person of color in the anti-racism training called me out for my racist behavior during the training itself.  It is painful and embarrassing to admit it, but I know it is the truth. I hope that acknowledging my faults can clear the way for other white people to start noticing their own. Nothing is going to change until white people recognize that we are part of the problem, that we are perpetuating the system of white supremacy, whether consciously or unconsciously. But we cannot stop at recognizing that racism works through us, we also must begin to change.
Every time I recognize a way in which I am perpetuating white supremacy, I try to change my behavior and truly stand up for communities of color. I repeatedly question my actions in all my work at PBMR, since I am in a position of power over women of color. I am trying to rework the system so that the young women can be in charge. I am continuously investigating how I, as a white woman, can play a role without recreating unjust structures. I am educating myself on both the oppression and strengths of different communities of color, as I know that each community—and each individual for that matter—has a unique experience of discrimination. I am constantly trying to learn how to be more aware and understanding.
I know talking about race is hard. Believe me, writing this article was really hard, and scary. And we are going to falter and err sometimes. But that’s okay, because mistakes are part of the learning process. The only real mistake is if we do not try at all.
Leah is a current Precious Blood Volunteer serving at Precious Blood Ministry of Reconciliation in Chicago.
To learn more about becoming a Precious Blood Volunteer go to www.preciousbloodvolunteers.org.