The Power of the Circle 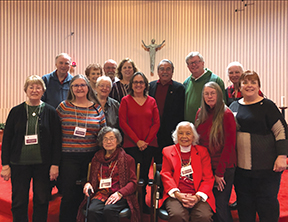 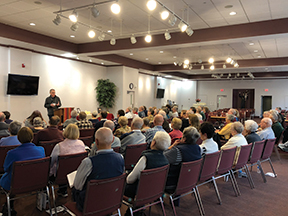 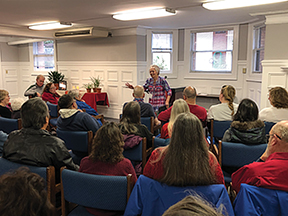 My first experience learning about the power of the circle came from the story of King Arthur. The legend tells us that King Arthur decided to build a round table for the knights, so that no one knight was over any other. Those who study symbols report that the symbol of the circle is found throughout the natural world. The circle has also been found throughout different faith traditions representing the divine symbol of wholeness. It has also been said that “because a circle has no beginning and no end, the agreement to connect in a circle allows energy to circulate from one person to the next, rather than being dissipated into the environment.”

As we began the retreat process in 2018, we recognized that this year was different. As the Community was visioning and dreaming about becoming a New Creation it was apparent that Companions needed the opportunity to get to know each other on a deeper level as well. My hope was that if we could enter deeper into relationship, then dreaming and visioning would become easier and more comfortable. In support of the New Creation process, we also invited community members to attend the retreat. Additionally, Fr. Dave Kelly and the staff of the Precious Blood Ministry of Reconciliation agreed to lead the retreats because of their expertise in utilizing circles of reconciliation at the Center.

Describing the Companion retreats this year as different seems simplistic. While Companions gathered for prayer and reflection remained the same, the presentations were considerably different from what Companions experienced in the past. Rather than the traditional structure of retreats, participants listened to talks and then reflected upon them. The Companion retreats had shorter talks followed by Companions talking and listening to each other as they participated in the circle process. Companions reflected upon topics such as how are they fed spiritually, what values do we share, and how are we called to be a Precious Blood community in the world today. At the conclusion of the retreats many of the Companions commented that while they thought they knew the Companions in the area, they felt that they now knew them at a deeper level. Others appreciated that they talked with members of the community for the first time and really got to know them. Everyone felt that meeting Sr. Donna and Fr. Dave really brought the Precious Blood Ministry of Reconciliation to life, which they had previously only read about in the newsletters. Everyone also concurred that they truly embodied what it means to live Precious Blood spirituality, and that the sharing of their stories inspired them in their own journeys of faith.

Sitting in a circle. Sharing stories. Sharing hopes and dreams. Sharing challenges and difficulties. Sharing from a place of truth and vulnerability and supporting others in the circle along the way. These are just a few of the powerful functions of the circle process that Companions experienced over the last year. While each of the locations we traveled to had different Companions and circumstances, the same results occurred. The day began on Saturday with people a little hesitant and anxious and ended with greater compassion and care for people they thought they knew. It was evident that the energy flowed from one person to the other and became stronger and stronger. Taking the time to share our stories also helped Companions move forward in the New Creation process. As they began to recognize in their stories of today, they could also see their hopes and dreams for the future.

The poet Meir Carasso, in a work titled “The Same,” beautifully describes the experience of our weekends. He writes, “This is a time when doing is split off from knowing and being is hardly at all. But here and there on this side of the horizon, people meet in sacred circles to form communities and speak their hearts that seek the same.” I don’t know if King Arthur wanted his knights to speak their hearts when he formed his round table, but I am grateful that Fr. Dave and Sr. Donna shared their experiences and led the retreats centered on the circle process. Throughout the year, Companions learned to speak their hearts, and our future as a community will be brighter because of it. Ω