By Former Precious Blood Volunteer Ryan Cornelissen
One of the most identifiable themes of Advent is preparation. But preparation for what? The birth of Jesus? The Catholic tradition of Christmas includes the season of Advent, because we are to understand how the radical truth of Jesus’ message provokes conversion and change of behavior. In the readings for the First Week of Advent-Year A, both St. Paul’s Letter to the Romans and Matthew’s Gospel point to the urgency and necessity to prepare ourselves to best interact with the body of Christ in the world as Jesus did. Of course, it is important to be mindful of the actions and behaviors we should avoid—as Paul mentions in the second reading—as an effort to condone proper conduct. But, in my opinion, the Gospel reading from Matthew better points us to a lifestyle of being awake! Instead of merely avoiding attitudes and practices, the conscious choice to be awake promotes a proactive searching and preparation for the truth that we are to live out.
[fusion_builder_container hundred_percent=”yes” overflow=”visible”][fusion_builder_row][fusion_builder_column type=”1_1″ background_position=”left top” background_color=”” border_size=”” border_color=”” border_style=”solid” spacing=”yes” background_image=”” background_repeat=”no-repeat” padding=”” margin_top=”0px” margin_bottom=”0px” class=”” id=”” animation_type=”” animation_speed=”0.3″ animation_direction=”left” hide_on_mobile=”no” center_content=”no” min_height=”none”] 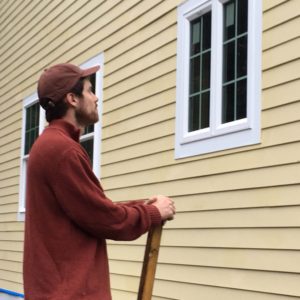 Ryan Cornelissen in front of a Habitat for Humanity home

As a Construction Site Supervisor for Habitat for Humanity in Boston, I lead volunteer groups through the process of building homes for those in need in the greater Boston area. In addition to working with volunteers, I have the pleasure of working alongside the families who are selected for each home to complete their 300 hours of “sweat-equity” on their future home (the equivalent of a down-payment on their house). Working alongside the mothers and fathers, I have the privilege of hearing stories of the reality of life before Habitat for these families.
This month, two new families were selected for the final duplex of a three duplex development in Roslindale, a Boston suburb. Felipe, one of the selected fathers, continues to share with me different pieces of the complex puzzle that is his life. Living in a 700 square foot apartment with his wife and two daughters (ages 3 and 8) was not exactly his dream. Felipe’s family is originally from the Dominican Republic, but he grew up in the United States. He works as a maintenance supervisor for a homeless shelter and rehabilitation support center in the Boston area, and when describing his job speaks of the importance of allowing people to share their stories and be listened to. Sitting there with my jaw wide open, I wished Felipe knew that his story is also worth listening to.
Earlier this week, up on the scaffold with Felipe installing siding on the gable wall of his future home, I decided to ask some simple questions to get to know him a bit better.
I asked him jokingly, “So, do you have any hobbies that you used to enjoy before having kids?” Felipe responded, “Can I be completely honest with you?” “Sure!” I said. “Well, my hobby has been preparing my family for where we are today,” Felipe stated.
Every minute that he has, Felipe is working at his job, and on-site with Habitat, to obtain a better life for his family. Before Habitat, every waking moment Felipe had outside of work he spent trying to learn about the daunting world of home ownership and financial responsibility. Felipe uses his time, effort and gifts for the benefit of his family; most days he doesn’t even eat lunch, so that his children can. Being connected to Habitat for Humanity is like a dream come true for Felipe and his wife. When they complete their hours, they will be the first members of their families to own a home.
The sense of urgency and attentiveness Felipe embodies as he puts the futures of his wife and daughters above his own is the type of preparation God has in mind for Advent. Christ is coming into the world as a human being, prepare! Each day God is coming to you in human form, will you be prepared? Will you give your best self no matter who is sent and what the circumstance? Felipe’s desire to give and serve his family is lived out each day as he works towards the goal of home ownership and a better future for his two daughters. The same goes for us that each day we are called to endlessly pursue a deeper relationship with God to better adjust our vision to Jesus’ vision and humbly expose our wounds and flaws in hopes of being held and healed by our loving God.
Just as Felipe gives of his life daily for his wife and daughters, we come to find that this journey is not about us, but instead the bringing about of God’s glory in the world. As you reflect this Advent, know that now is the time to prepare yourself and respond to God’s call for you to humbly carry the message out into the world.
To learn more about Precious Blood Volunteers go to www.preciousbloodvolunteers.org or contact us at volunteers@preciousbloodkc.org.
To apply to become a Precious Blood Volunteer go to https://preciousbloodkc.org/pbv-apply/
You can also read another one of Ryan’s reflections at https://preciousbloodkc.org/thanks-and-giving/