Below are the answers from former Precious Blood Volunteer Hector Avitia. 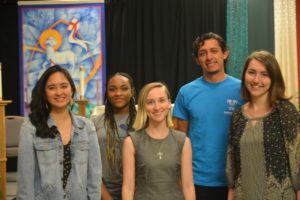 The relationship that has stood out the most to me is the one I developed with Aldena, a grandmother and student in our Education Lab. Prior to joining PBMR, I had worked with teenagers and young adults for over ten years. When I chose to volunteer at PBMR I knew that I would be working with the same age group, so making a connection with an African American grandmother came as a surprise. Aldena and I have very different backgrounds, and, on the surface, it would not make sense why we would connect. Through the Education Lab, we found common ground. She already had some knowledge and tons of potential, but needed someone who could help her bring that potential to life. I had no experience tutoring, but somehow we understood each other and fed off the other’s energy. I would get excited to see her pick up a new skill in math and when she would receive her good grades, while she enjoyed my patience and consistency with her.
One of the best experiences I had as a volunteer this year was when I helped a young man get his driver’s license. He had taken the written test about a year ago, but he felt really nervous about trying again and failing. He and I went over a practice test to make sure he was as ready as possible to pass the written test. He was really nervous going to the DMV, and his concerns were only exasperated by the obstacles we encountered at the facility. 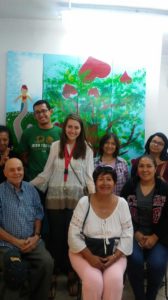 When we first arrived, there was a line out the door. A lot of people were complaining about having to wait outside in the cold. This fueled him a little and he took part in the complaints. We made it in, and after having his documents checked, we had to wait in another line to have his picture taken. With only two more people ahead of us, the DMV announced that we had to wait in line while the staff went on lunch! He just about lost it and almost walked off. At this point we had stood in line for about an hour and a half. After the lunch break he was able to finally get his picture taken, but the clerk had him retake his picture six times because the facial recognition technology was not capturing all the points on his face. At this point, we were tired of standing, tired of waiting, and hungry, but we were not done.
It was time to take the written portion of the test. The tests are administered on computers, and when he got up from his station I gave him two thumbs up, gesturing “Yes? You passed?”, to which he replied with his own two thumbs up and a big smile. We finally had something in the win column. The final obstacle was the actual driving test. I don’t know which of us was more nervous. He had overcome so much and only one more test stood between him and his license. He jumped into the vehicle with the instructor. Again, I felt helpless because I could not even stand by him to provide support. After pacing for what felt like hours, he walked into the waiting area with another big smile. On the ride back to PBMR he kept looking at his temporary license and began to do something I have rarely seen in these young men. He was able to talk about his plans and goals in such a way that sounded like they were within his reach. He would go on about getting auto insurance, getting a job, and not being scared of getting in trouble for driving without a license. The sky was the limit for this young man. When we arrived at the center he made sure to let everyone know that he got his license. Like a medal of honor, he flashed the small paper to everyone around. His expressions around the other youth were subtler than the ones I saw on the ride back to the center. I knew right then that I got to see a part of this young man that doesn’t always get the chance to see the light. And for that, I am extremely grateful.
I have grown in several ways this volunteer year. The biggest change that I have noticed about myself is how much better I have gotten at not judging individuals who do not think or act like me. Last year, I was one of those people who would ask myself “Why can’t they just work hard like me? Why can’t they just get their act together? Why do they do X, Y, and Z knowing that it will lead to A, B, and C?” when referring to those in the margins of society. I was too quick to judge one person’s morals and who I thought they were based on one event. I had little empathy and patience for those who were given opportunities and would not take advantage of them. I felt like anything that was said in their defense was just an excuse for their laziness and inability to act like an adult. I always believed that I had more challenges in my life than most Americans, and so there was no reason why anyone couldn’t achieve what I had achieved. 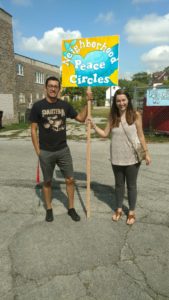 Part of being trauma-informed is recognizing that when a person who has experienced extreme trauma acts out or behaves in such a way that most of us would consider immature or unreasonable, that those behaviors have been influenced by an intense negative experience. Once we judge someone and assume too much about him or her, we lose patience because we believe that the only thing missing for this person to succeed is drive. We also assume that drive is directly linked to that person’s self-worth and morals. By thinking this way, we no longer feel like there is anything to do except for that person to “grow up”. In our trainings, we learned how the brain is affected by trauma, especially in younger people. One traumatic experience is enough to change the development of the brain forever, but many of the folks we work with have ongoing trauma. Having this awareness and knowledge has allowed me to act in a more compassionate way. By taking away the judgmental part of me out of the equation, I am able to step back and try to figure out how this individual has been affected by trauma and what I can do to help them overcome their obstacles. This, in turn, has improved my patience with everyone I encounter. I have not reached the level of understanding and compassion that I want, but I am very proud of the progress I have made.
Hector served as a Precious Blood Volunteer at Precious Blood Ministry of Reconciliation from August 2017-June 2018.
To learn more about becoming a Precious Blood Volunteer go to www.preciousbloodvolunteers.org.