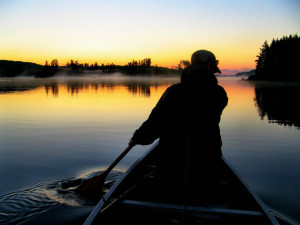 This year is thirty years since the “forty and under” community members gathered in a beautiful lake home in the Ozarks, thanks to Paul Sattler’s connection. This group of 28 or so members—depending who took the count or what day of the weekend it was—got together for no particular reason except to share a new spirit of community life. Some of the members older than forty thought it was an attempt to conspire against them and their authority. The intention for the gathering was neither political nor ecclesial.
It was a weekend of comradery, prayer, and discussion with no particular agenda. Fr. Joseph Charron, the Provincial then, joined the group at one point to share some thoughts about community life. Along with this retreat experience there was also time for social activities, which included harmless mockery among each other and imitations of certain members who obviously were not present to defend themselves. I woke up one morning to sounds of wheezing, sneezing, retching and gagging coming out of one of the bathrooms. Inquiring what was happening I was soon to learn that some of them were imitating sounds of our elder members, which we had experienced in past assemblies and/or retreats echoing down the halls of Precious Blood Seminary in the shared bathroom.
Now many of us are the members making wheezing and hacking sounds, although they may not be as pronounced because we have the privilege of private rooms at our assemblies. This past Assembly reminded me of the anniversary of the “forty and under” gathering and all that may have been conceived on that weekend—definitely unplanned and unintentional. I do not believe any of us gathered had been elected to leadership positions yet, however there seemed to be so many dreams to be brought to fruition outside the hierarchical structure: companion movement, Precious Blood Center, volunteer program, New Wine Press, scholarship program, mission houses, social outreach, better grasp of Society of Apostolic Life, ministry of reconciliation, Vietnam project, formation programs, and many other ministries I have probably missed. The point for me is not necessarily to name or boast about all the programs or movements, but rather, realize what can happen when people gather together to share their gifts and discuss possibilities.
On my drive back to New Mexico I kept recalling the gathering at the Ozarks, not only because it is the thirtieth anniversary but also because it seemed to have called many of us to look at life with different eyes. I realized that this weekend had a greater influence than I had ever imagined. I never thought about it as being a game changer for our future, but knew it had an impact on many of us.
I also had this memory recall because of what transpired during this past Assembly’s election process. It saddened me to hear a call from younger members to elect one of them to groom him for the future. The grooming process for many of us did not happen while serving in an elected position. I believe it happened while hanging out around a raft in the lake at midnight where questions were asked and dreams shared. To me, grooming happens way before anyone is ever elected. Maybe opportunities to hang around rafts are not made available enough so people can experience one’s true calling to community or to leadership.
This time around may not have been the call for the younger people to be elected as part of the province leadership, however, there will be a time when the election process will inevitably invite the younger members to those positions. The question remains: Where are the rafts that will help all of us be groomed to prepare for what life has in store for any of us? Some people may think they are already groomed and ready. I truly believe that all of us should have the privilege to share across a raft at midnight. It presents a different perspective when one may not swim well and has to hang on to a raft or to another member of the community.