Racism Wounds the Body of Christ 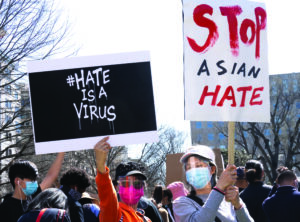 I’m weary of the challenges of trying to be an anti-racist. But the increasingly large number of verbal and physical attacks on Asian immigrants and Americans of Asian heritage (almost 4,000 incidents in the last year alone) leave me no choice but to pray and look for ways to act.

In the past 50 years, way before the covid pandemic caused by a virus that first infected humans in Wuhan, China, Asian countries have been blamed for many of the economic problems in the U.S. In the 1970s, American consumers increasingly came to prefer high-quality, energy efficient cars from manufacturers based in Japan. They were largely ignored by U.S. car companies. Because I was born in Cleveland, Ohio and went to college in Detroit, I was very aware of these changes. As my sisters and I gradually purchased our first cars, we all chose used cars from manufacturers like Honda and Toyota. Our parents were horrified. They felt strongly that we should “buy American,” even though it made no sense to us to do that.

During this time, individuals of Asian heritage, Chinese as well as Japanese (as someone from my parents’ generation said, “Who could tell them apart?”) were attacked. American auto companies and American steel companies had antiquated equipment and did not invest in modernization, prioritizing the short-term interests of stockholders over the quality of their products and the long-term health of their companies and workers. As globalization took its toll on workers and their families, the growing anti-union climate certainly did not help. In addition, the Vietnam W sar, its ignominious conclusion, the plight of refugees, and the situation of veterans all contributed to anti-Asian feeling.

The so-called “model minority” myth or universal success is not really about admiration of the intelligence and hard work of Asian Americans. It serves as an excuse for ignoring the still-present effects of the enslavement of African Americans, Jim Crow laws, the exclusion of African american veterans from GI Bill benefits, and differential investment in public schools and discriminatory mortgage programs. It is also exploited to arouse fear and uncertainty among lower and middle-class whites, to create feelings of exclusion from the American dream.

Stereotypes and assumptions about immigrants from China and Americans of Chinese heritage, the largest Asian ethnic group in the U.S., are woven into the fabric of our culture. The Chinese Exclusion Act of 1882 was the only instance of barring immigrants from a certain country until the Trump Muslim Ban, though non-white immigrants were not able to become citizens. (In 1940, people from China, the Philippines, and India were able to become citizens; it was not until the Immigration and Nationality Act of 1952 that all restrictions were removed.)

Over the decades, people of Asian heritage have largely kept quiet in response to verbal abuse, hostility from neighbors, denial of opportunities, and attacks on their businesses. “Keep your head down and work hard” was the usual response. The way Japanese immigrants and American citizens of Japanese descent showed up when ordered to leave their homes and got in line to board buses to desert concentration camps early in 1942 sums up the usual approach. This has contributed to the invisibility of anti-Asian racism, even here in California.

Asian cultures are not all the same, but it is true that in general, people have different ways of expressing feelings. But that does not mean that they do not feel deeply. Often it seems that we acknowledge the scientific and technical skills of people of Asian heritage, but do not consider them capable of artistic creativity or executive leadership.

I think Dr. Michael C. Lu, dean of the University of California, Berkeley where I work, puts it very well when he says, “We are treated like perpetual foreigners no matter how many years or generations we have been in this country.” It is long past time to treat Asian-Americans as our brothers and sisters, equal members of the American family.

Gather, Send calls Precious Blood Companions to speak clearly, to stand up, and to step out on behalf of our Asian and Asian-American neighbors. We need to speak out and stand in solidarity with them and speaking out against violence and the attitudes that allows violence to happen.

The United States Conference of Catholic Bishops (USCCB) Committee on Cultural Diversity in the Church has a subcommittee on Asian and Pacific Island Affairs, chaired by Bishop Oscar Solis of Salt Lake City. For those of you who find official church documents helpful, the usccb approved a message called Encountering Christ in Harmony in 2018. It is a bit tricky to find; start here: https://www.usccb.org/committees/cultural-diversity-church. The Committee is presently working on another statement in light of the recent incidents of violence against the aapi community.

The Stop AAPI Hate website is currently off-line, but many of their materials can be accessed through Chinese for Affirmative Action’s website.

Although I am weary, I will continue to respond to the Cry of the Blood, with the support of this community.

This article appeared in the April 2021 issue of the New Wine Press.