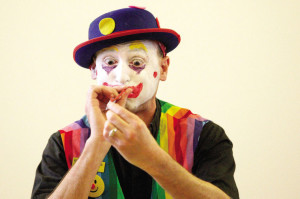 “To become a clown, you give up part of yourself,” Armbruster said.
Armbruster, regional vocation director with Missionaries of the Precious Blood based in Missouri, delivered the keynote Tuesday at the Sixth Grade Vocation Awareness Day.
More than 200 sixth-graders from Catholic schools in the Dubuque area attended the event at Divine Word College. Some arrived late because of a late arrival in their district caused by fog.
Armbruster never imagined he’d become a priest and a clown when he first donned a clown costume as a child for Halloween.
“I do it because of my love for clowning and my love for the ministry,” he said.
In ministry, Armbruster makes Scripture readings come to life. Clown ministry does the same thing.
“We take a look at the world around us and invite people to see things a little differently,” Armbruster said.
Mazzuchelli Catholic Middle School sixth-grader Abby Wagner asked Armbruster if he was judged because of his clown ministry.
“Yes. I have done skits at Mass and some people thought that was inappropriate,” Armbruster said.
He added that others parishioners enjoyed the skits that involved the gospel reading of Jesus breaking the bread.
Abby admitted she judged the clown priest at first. She thought the idea of clown ministry was “kind of weird” until she heard Armbruster speak.
“You can take the gospel or the homily and put it into your own way to make people understand it better,” Abby said.
William Haugen, a Mazzuchelli sixth-grader, also thought clown ministry was a little odd before the keynote address.
“He got his message across using the clowning,” William said.
After the presentation, girls attended sessions given by sisters and boys attended sessions provided by priests, a deacon and a seminarian.
Sister Rita Cameron, with the Dubuque Area Vocation Association, said the event raises awareness for what religious life has to offer.
Abby was excited to learn more details about the life of area religious sisters.
“It’s going to be really fun just to see what you can do when you’re older,” Abby said.
Armbruster implored students to think of their own lives during the day dedicated to vocations. He asked them what they want to be when they grow up, and then asked students to consider if that is what they think God wants them to be.
“The things that we like to do, the things that we’re good at, someway, somehow, hopefully that is our vocation,” Armbruster said.
Video of Fr. Timothy talking about clowning as a ministry here.