You’ve probably seen news about the synod of bishops meeting at the Vatican this month to discuss issues that impact the church in the Amazon region of South America. (See for example, Pope Francis opens Amazon synod, says to ‘light the fire of the Gospel’ in the region.)

But did you know there is a strong Precious Blood connection to that meeting?

That connection is Bishop Erwin Kräutler. 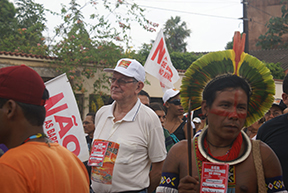 The 80-year-old Austrian was ordained a priest for the Society of the Precious Blood in 1965 and began missionary work in Brazil. In 1980, he was appointed Coadjutor Bishop of Xingu in central Brazil. Today that territorial prelature has some 382,650 Catholics in 15 parishes served by 33 priests and 41 women religious. That is an average of 11,954 Catholics per priest.

Xingu, named for the Xingu River which winds through it, is in the very heart of the Amazon.

Kräutler retired in 2015, but remains active, most recently as part of the preparatory council appointed by Pope Francis ahead of the synod on the Amazon.

It was Kräutler who in April 2014 broached the idea with Pope Francis of ordaining “mature married men from indigenous communities” to the priesthood to ensure Catholic communities in remote areas have regular access to the sacraments.

Pope Francis, according to media reports later confirmed by the missionary bishop, told Kräutler that he would examine the issue if a national conference of bishops proposed it to him. So later that year,  Kräutler and Brazilian Cardinal Claudio Hummes presented the idea of ordaining married community elders to Brazil’s National Conference of Bishops, which formed a commission to delve deeper into the matter.

The idea of ordaining so called “viri probati,” literally “tested men,” was include in the instrumentum laboris, or working document, of the synod on the Amazon, ensuring that it will be discussed sometime in the next weeks. Furthermore, Hummes is the “relator,” or the person appointed by Pope Francis to guide the bishops at the in the synod of the Amazon.

“The question, then, is how can we provide [Sunday] Eucharist to all communities, or at least during the important Catholic festivities, such as Easter and Christmas,” Kräutler said in a radio interview last month.

“Priests appear in some of these communities two, three times per year. It is unbearable,” he said.

But Kräutler adds that the discussion of ordained married men is just one small part of the synod’s agenda. The synod will also address “integral ecology.” He said Pope Francis’ encyclical on the environment, Laudato Si’: On Care for Our Common Home, was like a working manual for those preparing the synod.

Besides evangelization (what Kräutler described as “new paths for the church”) the synod will take up themes found in Laudato Si’, like concern for marginalized people and protection of the environment.

These are themes very familiar to Kraulter. In his more than five decades in the Amazon, Kräutler has often spoken against unchecked development, corporate farmers and ranchers, and loggers who degrade the Amazon forest. According to Catholic News Service, Kräutler has been on a hit list for at least a decade and has been under police protection.

Kräutler was instrumental in helping bring to justice the killers of American Sr. Dorothy Stang, a member of the Sisters of Notre Dame de Namur who was assassinated in 2005 because of her work with landless peasants in the Amazon region.

In 2010 he received the Right Livelihood Award, sometimes called the alternative Nobel Prize, “for a lifetime of work for the human and environmental rights of indigenous peoples and for his tireless efforts to save the Amazon forest from destruction.”

So as you follow news accounts of this synod, remember its Precious Blood connections.

[Dennis Coday is director of program development for the Precious Blood Renewal Center in Liberty.]