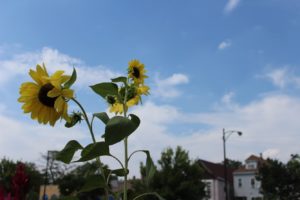 Steven Dougherty is a Precious Blood Volunteer serving at Precious Blood Ministry of Reconciliation (PBMR) in Chicago, Illinois. In the three reflections below, Steven paints pictures of hope he has encountered while working there.

My second week in Chicago was one of the most violent in recent history. Waiting for the bus, I saw a man and a woman talking. They spoke slowly. The air was thick and hot. As she was leaving, the woman leaned in and hugged the man. Then she held him for a moment at arm’s length. She looked him in the eyes, and with worry in her throat she said, “Be safe.” Her words, thick in the hot air. They were desperate wounded words, heavy with fear. This was a command, a salutation, a wish—something impossible, or at least it seemed so at the time. So many people had died. Then she let the man go, freeing him from her temporary protection, hoping her wish would be enough. I thought it was beautiful how much she cared for this man, how well they must have known each other. Then the woman came to me and did the same!

In my months of volunteering at PBMR I have witnessed struggle, I have witnessed pain, and I have witnessed loss. I have been asked many times about hope. How can I stay hopeful doing the work I do at PBMR? I struggle with this, because finding hope feels like a privilege. If I say that I have hope that this community I work in will be revitalized and not gentrified, if I say that I hope the people we help can get jobs and will be treated fairly, or if I say that I hope people will stop dying so young, I am doing so only for myself. I think these things because at the end of the day I am tired. I have done what I know I can do, and the rest seems impossible, so I hope. I am not saying this is a bad thing, only that is not the thing I want it to be. Access to hope has become a privilege. It has become a way of distancing ourselves from the responsibility of the world’s problems. Hope for things to get better keeps things the way they are.

But there is another side to all of this, because hope does not have to be something that is stagnant. Hope can move through us and into others. When this happens, when hope draws us together, there is power—power for real change in the world. When people work together with a united vision of hope, when they know exactly what they want to accomplish, hope can be actualized. We can reach out with hope and work together to make sure that everything will be okay, and although it is hard, we do this work anyway.

In my months of volunteering at PBMR I have also witnessed this: a new kind of hope—a hope that does things in the world. It is a hope that people share with strangers. It is mixed with fear and pain, but it is strong enough to overcome them both. Since it was given to me by the woman at the bus stop, I have seen it all over Chicago, I have even used it myself: “Be safe.” There is so much behind these words. They carry a message that you are cared for, and they carry a promise that although there is so much danger that I cannot solve, you have my protection. Anytime someone leaves the Center you hear all of this. Everyone is not always safe. In fact, our participants are rarely safe—but will still hope. We believe the impossible and together we make it a little more possible.