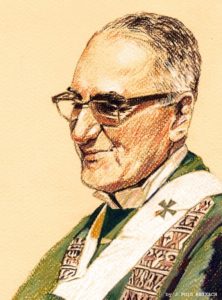 On October 14, 2018 the Catholic Church will officially recognize the sainthood of Archbishop Oscar Romero. To the Salvadoran people he has been San Oscar Romero for many years. No canonization was needed for the Salvadoran people. Nevertheless, he will be officially canonized along with Pope Paul VI for the universal Church.
Oscar Romero, who will become the first canonized Salvadoran saint, was murdered while celebrating Mass in a hospital chapel on March 24, 1980 a day after telling the army, made up mostly of peasants, that they were killing their own people. He told them, “No soldier is obligated to obey an order that is contrary to the will of God.”
He was shot through the heart while celebrating mass by gunmen linked to the right-wing death squads terrorizing the country. He had just said, “One must not love oneself so much as to avoid getting involved in the risks of life that history demands of us, and those who fend off danger, will lose their lives.”
Romero was outspoken against the military oppression of the Salvadoran people during the bloody civil war and critical of the involvement of the United States in this conflict. Pope John Paul II said, “He gave his life for the Church and the people of his beloved country.”
There is much about Oscar Romero that makes him a Saint for our times. For those of us who are Missionaries of the Precious Blood, his life of love, and service to his people challenges us to live out our charism to the marginalized through the blood of Christ in our lives every day. In his daily life he demonstrated how to be a church of and for the poor. Oscar Romero heard the cry of the poor and the cry of the blood shed by his people. And thus, he became the defender of the poor and a voice for the voiceless.
Romero used the spoken and written word to speak truth to his people. He was one of the better quoted clerics of his time. Just about every one of his public appearances as archbishop was captured not only by local television and radio, but internationally as well, He also wrote a weekly column in his diocesan newspaper. Many of his sermons and talks continue to be shared among his people. They are words that inspire, nourish, instruct, compel and encourage us to be prophetic and live out our faith.
Let us reflect on his message in his own words:
How I would like to engrave this idea
on each one’s heart;
Christianity is not a collection of truths to be believed,
of laws to be obeyed,
of prohibitions.
That makes it very distasteful.
Christianity is a person,
one who loved so much,
one who calls for our love.
Christianity is Christ.
-November 6, 1977
How beautiful will be the day
when all the baptized understand
that their work, their job
is priestly work,
that just as I celebrate mass at the altar,
so each carpenter celebrates Mass at his workbench,
and each metal worker,
each professional,
each doctor with a scalpel,
the market worker at her stand,
is performing a priestly office!
How many cabdrivers, I know, listen to this message
there in their cabs,
you are a priest at the wheel, my friend,
if you work with honesty,
consecrating that taxi of yours to God,
becoming a message of peace and love
to the passengers who ride in your cab.
-November 20, 1977
Even when they call us mad,
when they call us subversives and communists
and all of the epithets they put on us,
we know that we only preach
the subversive witness of the Beatitudes,
which have turned everything upside down
to proclaim blessed are the poor,
blessed the thirsting for justice,
blessed the suffering.
May 11, 1978
The violence we preach is not
the violence of the sword,
the violence of hatred.
it is the violence of love,
of brotherhood,
the violence that wills to beat weapons
into sickles for work.
-November 27, 1977
As Missionaries of the Precious Blood we believe that all blood is precious. Understanding this, the blood of Christ calls us to be with the marginalized, to be with God’s poor, to speak for the voiceless. This was the life of Oscar Romero. He saw the suffering of his people and was moved to raise his voice on their behalf. He saw the shedding of the blood of his people and he was compelled to walk with them in their way of the cross. Saint Oscar Romero is indeed a saint for our times. He is a saint for the Missionaries of the Precious Blood.