On Charlottesville and the Feast of Maximilian Kolbe 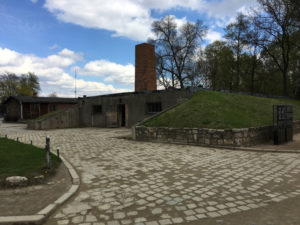 The crematorium at Auschwitz where St. Maximilian Kolbe was martyred.

August 14, 2017
Feast of St. Maximilian Kolbe
Dear Members, Companions, and Friends,
When I was in Poland in April, I spent a day at Auschwitz. One of the most moving moments was visiting the cell where Father Maximilian Kolbe was imprisoned. It was Easter week, so there was an Easter candle and a stole draped on a kneeler in his cell, symbols of life and the legacy of a priest who gave his life so that others might live. Today’s feast reminds us that St. Maximilian Kolbe was martyred because he spoke up against injustice and oppression. He died because he opposed the Nazis and their white supremacist propaganda.
In the darkness of the events this past weekend in Charlottesville, Virginia—and in the light of today’s feast and the 202nd anniversary of the founding of the Missionaries of the Precious Blood tomorrow—we who often quote our founder, Saint Gaspar, and his famous words about “a thousand tongues” to proclaim the merits of the Precious Blood of Jesus, must raise our voices to condemn racism and hate speech wherever and whenever it occurs.
We saw again this weekend where hate speech leads: to violence and death. Once again, we are overwhelmed with grief because the words of hate became a weapon of death and destruction as a car plowed into protestors. We mourn the loss Heather Heyer described by her friends “as a passionate advocate for the disenfranchised who was moved to tears by the world’s injustices.” It was this “sense of conviction” that “led her to join demonstrators protesting a rally of white nationalists in Charlottesville” this past Saturday. We mourn the death of the two police officers who were killed in the line of duty. We grieve the many who were bloodied, bruised, and broken when hate speech turned into violence.
When Saint Gaspar prayed for a thousand tongues, he dreamed of a community of ambassadors for Christ who proclaimed with their words and their witness the reconciliation won for us in the blood of Jesus. How are we using our tongues to speak truth to those in power? How are we using our tongues to build up and not tear down the body of Christ? How are we using our tongues to offer words of encouragement, compassion, and care to those who are victims of injustice and oppression, who are targets of hate-filled speech and violence? How are we using our tongues to confront and condemn those who promote bigotry?
On this feast of a priest and martyr who used his tongue as a mighty sword against injustice and paid the ultimate price; and in anticipation of the anniversary of our founding by Saint Gaspar who prayed for “a thousand tongues” to proclaim and promote peace and reconciliation, I am reminded of the famous quote from the Martin Niemoller, another prominent critic of Adolph Hitler. Niemoller, a Protestant pastor who was imprisoned for seven years in a concentration camp because of his resistance to the evil of Nazism, said, “First they came for the socialists and I did not speak out because I was not a socialist. Then they came for the trade unionists and I did not speak out because I was not a trade unionist. Then they came for the Jews and I did not speak out because I was not a Jew. Then they came for me—and there was no one left to speak for me.”
As we celebrate the anniversary of our founding, may we use our thousand tongues to condemn hate and proclaim love as we stand up, speak out, and give witness to reconciliation in the blood of Christ.
With peace in the Blood of Christ,
Joe Nassal, C.PP.S.
Provincial Director