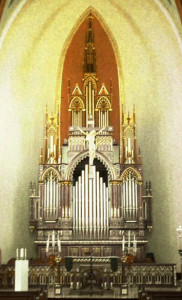 St. Francis Xavier Church will host a recital of organ and piano duets on Sunday, June 14th at 3:30pm. Participating in this event will be Donovan Jones and Michael Shaw, both of St. Joseph.
The program will include both sacred and classical selections. Some of the hymn settings chosen for the day are: “To God Be the Glory,” “Lead Me to Calvary,” “Lord of the Dance,” “Lift High the Cross” and “Abide with Me”. Faure’s “Sanctus,” Mozart’s “Alleluia” and Mendelssohn’s “War March of the Priests” will be among the pieces in the classical portion.
Donovan, Director of Music here at St. Francis Xavier Parish, will be a senior at Missouri Western State University in August studying voice performance with Dr. Susan Carter. He has studied pipe organ with Bill McMurray and piano with Dr. Nathanael May and Jerry Anderson. Donovan is from Tarkio, Missouri.
Michael is an organist and pianist at St. Francis Xavier Church. Originally from Jefferson City, Michael is a graduate from the University of Missouri, with a B.S. Ed., cum laude degree. He studied piano with Dr. Thomasina Greene and Dr. Richard Morris. Mr. Shaw also was a pipe organ student of Dr. Perry Parrigin.
The recital will be presented at no charge and coincides with the 40th anniversary of the ordination to the priesthood of Father Ron Will.