Meditations for the Year of Mercy: Seeking Out the Suffering 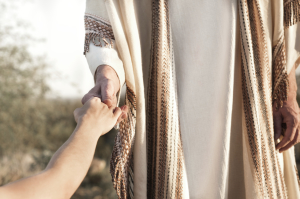 by Fr. Joe Nassal, C.PP.S., Provincial Director
As we commemorated the life and witness of Dr. Martin Luther King, Jr., a quote from Andrew Fletcher caught my eye: “Martin Luther King was attracted to human hardship,” he wrote. “He did not react to suffering by simply rising to the occasion when he came across it. He sought it out.” Dr. King was following the example of Jesus who often sought out difficult and dangerous situations to bring mercy, compassion, healing and peace.
Recall the story of the man with the withered hand (Mark 3, 1-6). Jesus knew the religious leaders were watching him “closely to see if he would cure him on the Sabbath so that they might accuse him.” Jesus calls the man with the withered hand to come and stand with him. As he heals the man with the command, “Stretch out your hand,” he is challenging the scribes and Pharisees to stretch their hearts, to see in a new way, to be more inclusive and open.
While most of us want to avoid conflict at all costs, Jesus was willing to step in the middle of the conflict as the mediator of God’s mercy and compassion. This is one of the challenges for ministers of mercy and ambassadors of reconciliation, what we often call the willingness to “stand in the breach.” It is one of the qualities we admire in Dr. King, Andrew Fletcher writes, the “consistent way in which he chose to expose himself to suffering.”
As people of the Precious Blood, we are engaged daily in the paschal mystery. Indeed, our Constitution states, “Before his incorporation into the Congregation the candidate undergoes a special program of religious formation which includes a more intense experience of the paschal mystery…. (c35).” We don’t seek out situations of suffering because we’re masochists; we do it because as ministers of mercy we seek to do what Jesus did: to stand in solidarity with those who suffer. That is why, according to Fletcher, Martin Luther King “claimed that he would choose to live during no other time in history than during the second half of the twentieth century, when, as he put it, the world was ‘all messed up.’”
The world is still ‘all messed up’ and people of faith—especially Precious Blood people—want to seek out those people and places where we can help. We seek to stand with those who are suffering, those who are excluded, those who are marginalized, those who are pushed away from society and the church’s table. It is the least comfortable place to be but we do it because as Pope Francis wrote in The Joy of the Gospel, Jesus “has taken the initiative” and “loved us first,” so we are able to “move forward, boldly take the initiative, go out to others, seek those who have fallen away, stand at the crossroads and welcome the outcast. Such a community has an endless desire to show mercy (24).”