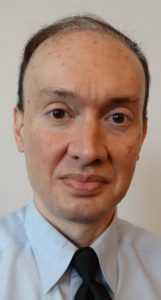 Marcos Palacios has been admitted into the initial formation program of the Missionaries of the Precious Blood. He moved into the house of formation in Chicago in August and is attending classes at St. Xavier University this fall.

Palacios, 48, was born in Venezuela and grew up in Tampa, where he lived until his recent move to Chicago. The youngest of three brothers, he speaks Spanish and Portuguese in addition to English. He previously worked in a library and in customer service at a hotel reservation center.

Palacios found the Missionaries online. He was exploring a call to the priesthood, and was looking for a religious community whose message spoke to him.

Born a Catholic, he’d joined an evangelical Christian church as a young adult. “I had a born-again experience, and went through a lot of changes in my faith life,” he said. “But the one aspect that stuck with me was our salvation. When you’re an evangelical, one of the things you’re are supposed to do is share your faith, to get people saved like you. In Precious Blood spirituality, I see the same focus on salvation. It’s a common bond that unites all Christians.”

Palacios returned to the Catholic faith gradually, he said, and has been fully active in the Catholic Church since 2003.

He will study philosophy and theology at St. Xavier. He has taken such classes before, he said, and he looks forward to his studies this fall.