Love is Stronger Than Hate 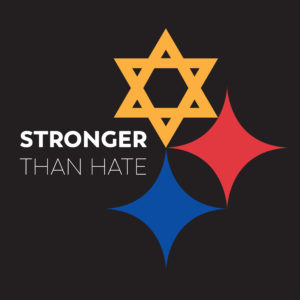 On November 9-10, 1938 the Nazis began a pogrom throughout Germany against the Jewish community. This pogrom was carried out by SA paramilitary forces and German civilians. Jewish homes, hospitals and schools were ransacked. The attackers smashed windows and demolished buildings with sledgehammers. They destroyed 267 synagogues throughout Germany and over 7,000 businesses were either destroyed or damaged. Early reports estimated the number of Jews murdered to be 91. Later reports put the number as much higher. It was state sponsored terrorism perpetuated on the Jewish people. This event is known as Kristallnacht or the Night of Broken Glass.

Almost 50 years later another moment of terror has taken place against the Jewish people here in our country. The mass shooting in Pittsburgh at the Tree of Life Synagogue, during a naming ceremony for a child being welcomed into a relationship with God and the Jewish people, was yet another tragic and horrific moment in the life of the Jewish community and in our recent history as a nation. Eleven people were murdered in their House of Worship, a sacred space, by a white supremacist filled with hatred for Jews.

As a Precious Blood family, we condemn this heinous and cowardly act on a house of worship and offer our heartfelt condolences as we stand in solidarity with our Jewish sisters and brothers. We condemn all acts of violence and hate. We call on our leaders to address the plague of gun violence in our communities, not by suggesting that our schools and places of worship become armed camps, but rather looking at why any individual is allowed to purchase assault weapons.

Our response must be one of love and tolerance. We are all children of a loving God: black, brown, white and beyond; male and female; Christian, Jewish, Muslim and more; LGBTQ and straight; young and old; rich and poor, citizens and immigrants; all of us together.

We must confront a culture that allows gun violence and excuses white nationalism that speaks of hate. There should be no place for this in our nation.

The Rabbi Jeffrey Myers, who witnessed the slaughter of his congregants, spoke at a vigil n Sunday: “My cup overflows with love,” he said. “That’s how you defeat hate.” Let us all defeat hatred with love.