“Now there were shepherds in that region living in the fields

And keeping watch over their flock.” 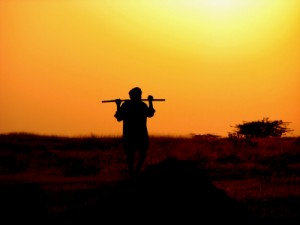 The Christmas story is filled with images of light and night, of insiders and outsiders, of those who are in the center of power and those who are on the margins.
The prophet Isaiah proclaims these contrasts with his bold prediction, “The people who walked in darkness have seen a great light; upon those who dwelt in the land of gloom, a light has shone (Is. 9, 1).” The reason for this floodlight of redeeming grace is because “a child is born to us, a son given to us.” One look at the names given to him tells of the promise: “They name him Wonder-Counselor, God-Hero, Father-Forever, Prince of Peace (9, 5).” These titles speak of royalty; the mention of a throne and a kingdom causes one to assume this child will be the consummate insider.
But, of course, we know the story. In Luke’s telling, the insiders have names like Caesar Augustus and Quirinius, political figures, an emperor and a governor, demanding that everyone enroll, not in health care but as citizens. So the outsiders in this Christmas story are the young couple, Joseph and Mary, who are forced to register even though travel is difficult and Mary is pregnant. They become the consummate outsiders when all the motels and hotels are overbooked and they have to seek refuge in a barn (Luke 2, 7).
The other outsiders in this story, of course, are the shepherds “living in the fields and keeping the night watch over their flock (Luke 2, 8).” These are the ones who receive the birth announcement first; not the insiders, not the royalty, not the government officials, but the ones who were living outside. There was no need for them to register for the census because they didn’t count. Because of their odoriferous disposition (not many opportunities to shower and shave when on the lookout for stray sheep), they were the outcasts. So, naturally, God chose these night watchers to be the first to catch a glimpse of the dawn of God’s glory.
“Do not be afraid,” the angel tells them as they are awash in an awesome light show. Perhaps the angel is a little over-the-top with the glitzy special effects to announce the birth of a child asleep in a manger instead of a mansion, but it is the message that shoots like a laser into the hearts of these shepherds: “I proclaim to you good news of great joy that will be for all the people. For today in the city of David a savior has been born for you who is Christ the Lord (Luke 2, 10-11).” The sign the angel gives them must have made the shepherds feel right at home: “You will find an infant wrapped in swaddling clothes and lying in a manger (Luke 2, 12).” They often sought shelter from inclement weather in sheds, and likely slept now and then on bales of hay, always keeping one eye open for a predator creeping up on unsuspecting sheep.
Early in his papacy—in his homily for the Chrism Mass on Holy Thursday, March 28—Pope Francis famously challenged all priests to be “shepherds living with the smell of the sheep.” He continues to challenge all of us to “go out” to the margins, “to the outskirts where there is suffering, bloodshed, blindness that longs for sight, and prisoners in thrall to many evil masters.” The Pope said, “The priest who seldom goes out of himself…missed out on the best of the people, on what can stir the depths of his priestly heart.” Those who fail to “go out,” the Holy Father said, “end up sad…in some sense becoming collectors of antiques or novelties, instead of being shepherds living with the odor of the sheep.”
Since his election, Pope Francis has been on a mission of mercy. As Precious Blood people committed to the renewal of the church and the reconciliation of the world, we often hear in the Holy Father’s words the call of the Blood. “Those who do not go out of themselves,” Pope Francis said on Holy Thursday, “instead of being mediators, gradually become managers.”
The challenge of Pope Francis to the shepherds of the church on Holy Thursday finds its genesis in the call to the shepherds on Christmas night. For just as the shepherds “keeping the night watch” were the first to hear the good news of Christ’s birth, so on the night before he died Jesus summoned his disciples to accompany him to the Mount of Olives and keep watch with him. “Pray that you may not be put to the test,” he tells them, and then “went down on his knees and prayed, “Father, if it is your will take this cup from me; yet not my will but yours be done (Luke 22, 40-42).”
As we know, the crib and the cross are inseparable. This Christmas, may we hear the call of Christ echoed so eloquently in the words of Pope Francis to “go out” and stand with those on the margins as we work, pray, and “keep watch” for the coming of that day when all are one. On behalf of the Leadership Team and the Province Staff, a Blessed Christmas to you and all with whom you stand at the tables and stables, the edges and margins of life! And may the New Year find us “keeping watch,” awake and aware of the God who is with us always.