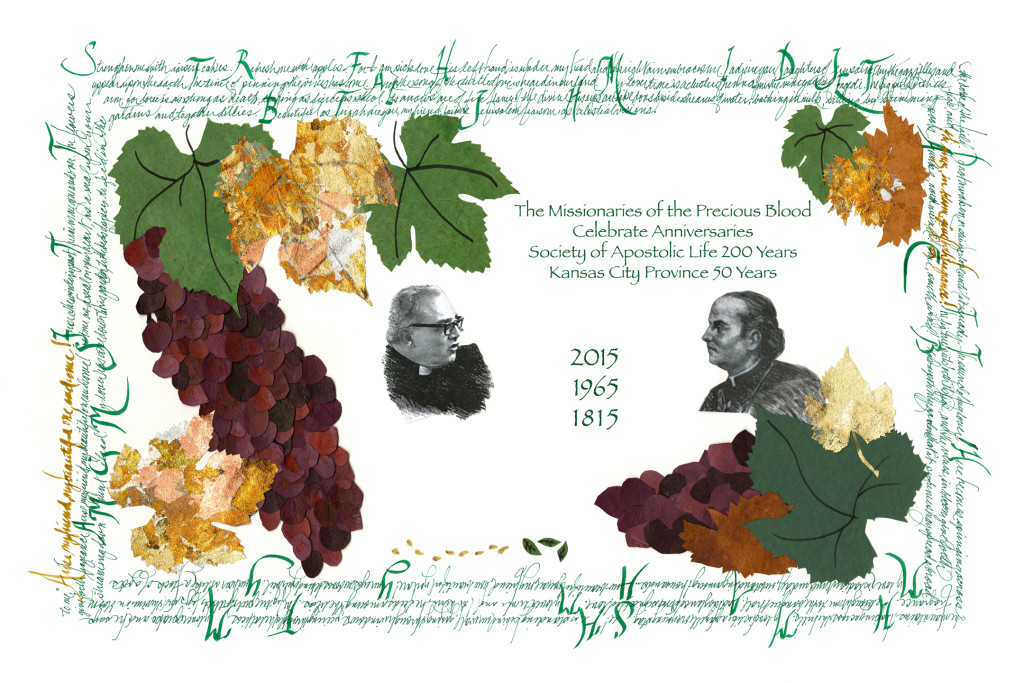 Anniversary Poster 2015
This poster celebrates our 200th anniversary as a Society of Apostolic Life and our 50th anniversary as the Kansas City Province. This celebrates our past and even more our future.
The poster is surrounded by all the verses from the Song of Songs used by St. Gaspar in his eleven annual circular letters written from 1826-1837. He quotes from the Song of Songs more than any other book from the Bible, 23 times out of 117 total verses. The text is in green, the traditional color for hope. Two verses are in gold, “Arise, my beloved and come,” and “The vines, in bloom, give forth fragrance.” These are highlighted in this way to point to the future ahead of us.
The two bunches of grapes symbolize both the living members and companions on the upper left, and the deceased members on the lower right, in repose, as it were.
Fr. Dan Schaefer, CPPS, our first provincial in 1965, is facing right, as if into the future, while St. Gaspar del Bufalo is facing left as if calling Fr. Dan and by extension ourselves into the future as the one holding the charism of the Precious Blood for us all.
The grape leaves suggest the interior of the Temple in Jerusalem, which walls inside were covered with luxuriant vegetation (I Kings: 6-7) to both remember the Garden of Eden and to call the people forward into the heavenly paradise.
There are henna seeds and leaves, mentioned in the Song of Songs. From as early as the second millennium before Christ in many cultures, and even till this day in the Middles East, Africa, and India, henna seeds and leaves were used to paint the bride and groom on the “mendhyka,” the “henna night.” The future we look forward to is the wedding feast of heaven and earth, when the bride and the groom meet in an eternal embrace of love at the final Eucharistic banquet and share the Eschatological Cup of Life!