Growing up, I regularly attended youth ministry events titled something along the lines of, “Be a Hero for Jesus!” The message I heard at those events usually went something like this: “Jesus calls us to be moral exemplars in society. We need to stand out from our peers in a way that points to Christ and brings others to Him. By performing extraordinary acts with extraordinary courage, we will gather attention from society that we will then be able to redirect to Jesus.”

Part of the use of the word “Hero” was, of course, a means of appealing to our ten-year-old imagination: we could be Superman or Wonder Woman. I did not consider, however, how this appeals to our modern obsession with individualism, until I first heard the song “Helplessness Blues” by the band Fleet Foxes. As I contemplated the lyrics over time, the first verse has always been the most striking to me:

I was raised up believing I was somehow unique
Like a snowflake distinct among snowflakes,
unique in each way you can see
And now after some thinking, I’d say I’d rather be
A functioning cog in some great machinery
serving something beyond me

While that verse could be interpreted as critiquing the Participation Trophy Phenomenon, I think it more clearly speaks to the desire to contribute in small, cooperative ways to a larger, more meaningful society. Those youth ministry events encourage great individual acts, not small, perhaps menial, acts that add up to something greater than we could do individually. I think that our youth ministers did not want to encourage those particular acts, primarily because they can feel menial. An accountant for a homeless shelter may not feel like she’s contributing much to the world, but that shelter would not exist for very long without her, leading to fewer people getting the services they need.

This volunteer year, I have often felt like a “cog in some great machinery,” which has in some ways left me a little unsatisfied. I have felt the need to begin some great project which will overhaul the way the clinic works and drastically improve the care for our patients. I would love to say that desire comes solely from the care I feel for our patients, but I think some of it comes from a desire to stand out from the crowd—to be a Hero for Jesus. In college, we often had speakers from small organizations come and speak about what caused them to start a nonprofit that helps with human trafficking or world hunger. I often wondered if, instead of having many small organizations dedicated to eradicating a huge social issue like human trafficking, having a few large ones would be able to mobilize more people and more resources. I wondered if people’s desire to be a Hero for Jesus by starting their own organization was a less efficient way of decreasing hunger and slavery in our world than joining a pre- existing one and adding their skills and talents to an already established nonprofit.

People will often say that the desire to be a cog in a machine is fueled by complacency. But I am learning to see the benefits to it. It allows good, helpful organiations to function smoothly. It helps you make significant changes in the world without burning yourself out hunting for the next great idea.

A few months ago, some street evangelists stopped Brooke (my wife, also a Precious Blood Volunteer) and I on our walk home and asked when we were saved. I thought, I don’t think salvation is a one-time thing, I think it’s a process, which is why Paul tells us “work out your salvation.” But, because I knew I would make my wife uncomfortable confronting street evange- lists, I said, “When I was around six.” He then asked, “Does your salvation make you want to go out and evangelize?” My answer was something along the lines of, “Actually, I feel like I usually want to show people what Christ is like rather than telling them.” We then told each other to have a good day and parted ways. These people were looking for big ways to serve Christ, which is good, but I’m trying to find consolation in doing small things, routine things to serve Christ, other people, and the broader creation. 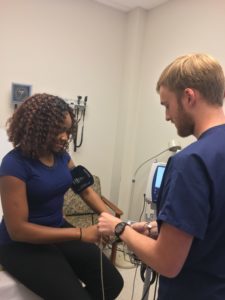 Koby Buth with a patient at KC CARE Health Center

This article originally appeared in the June 2019 edition of the New Wine Press.