Go Back to the Drawing Board 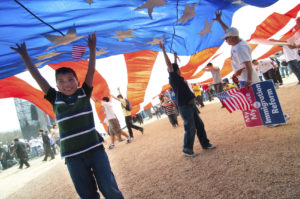 Last week the Trump administration announced a new immigration plan with family visas greatly reduced and no mention of Dreamers. This plan is not the just and comprehensive reform of our immigration system that we as a Precious Blood community envision in our corporate stance. The President and his administration must go back to square one to come up with a truly comprehensive, and just reform of our broken immigration system.

President Trump outlined his plan for “modernizing our immigration system for a stronger America,” where he aims to impose more new security measures at the border, dismantle the asylum process, and vastly scale back the system of family-based immigration which has allowed immigrants to bring their spouses and children to live with them. Over the last two years, this administration’s immigration policy has resulted in a ban on travel from six Muslim-majority countries, separation of families at the border, closing the border to asylum seekers and an obsessive desire to build a wall along the U.S.—Mexico border.

As Precious Blood Missionaries we are called to have a love and respect for the poor and the vulnerable in our midst and to recognize the dignity in every human being. It is because of this that we are called to advocate for migrants, refugees and asylum seekers. Our history tells us that this country was built by immigrants who left their homes under difficult circumstances to make a new life for themselves. This administration’s “new” plan does not address the reality of those who are presently fleeing from violence and oppressive poverty. President Trump forgets that America is stronger when we embrace diversity and work together.

The requirements of this new plan are not in keeping with the Gospel of Jesus, who welcomed all people. Therefore, we advocate that we meet the needs of all vulnerable people. This “new” plan sounds very much like the policies of the last two years, which has served as a sad narrative seeking to demonize and dehumanize our immigrant neighbors. We should urge our President and his administration to go back to the drawing board and find solutions for the common good.