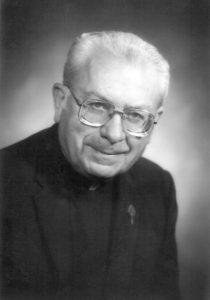 Fr. Alvin L. Herber, C.PP.S., 93, died on October 12, 2017 at St. Charles Center in Carthagena, OH. Born August 10, 1924 in Hessen Cassel, IN to Leo and Edna Herber, he entered the Missionaries of the Precious Blood on August 31, 1942 at St. Joseph College, Rensselaer, IN; made Temporary Profession on December 3, 1945 and Definitive Incorporation on December 3, 1948, both at St. Charles Seminary, Carthagena, OH. On May18, 1950 he was ordained for the Missionaries of the Precious Blood at St. Charles Seminary by Bishop George Rehring.
Fr. Al’s first assignment was St. Mary Parish in Centerville, IA, where he served as parochial vicar from 1950-1957. This was followed by a series of shorter assignments between 1957 and 1959: parochial vicar at Church of Mary Immaculate, Kirksville, MO; administrator of St. Michael Church, Kahoka, MO and its mission, Assumption Church in Wayland; instructor at St. Thomas Seminary, Hannibal, MO; and finally, St. Rita Hospital, Lima, OH.
In September of 1959 he began ministry at St. Joseph College, Rensselaer, IN as Director of Seminarians in Xavier Hall, where he served until August of 1963, when he was assigned to Sacred Heart College, Wichita, KS as chaplain and instructor.
In August of 1966, Fr. Al began what was to be 35 years of service to the Church as a pastor when he began his ministry among the people of St. Benedict Parish in Nebraska City, NE. Then in 1973 he became pastor of St. Mary Parish in Garden City, KS, where he served for four years. In 1977 Fr. Al began what was to be his longest term as pastor when he arrived at St. James Parish in Liberty, MO. At that time, the church was quite small and located just off the downtown area—and the need for a larger church was becoming evident as the city was growing. As pastor, Fr. Al oversaw the construction of a new church, rectory, and school at its present location in Liberty.
Following his 11 years at St. James, Fr. Al served as pastor in a series of parishes: St. Catherine, Tulsa, OK (1988-1990); Immaculate Conception, Montrose, MO (1990-1991); St. John the Baptist, Rib Lake, WI (1991-1996); and St. Munchin, Cameron, MO (1996-2001). From 2001-2004, he served in semi-retirement at Church of the Ascension, Overland Park, KS.
In 2004, after 54 years of service to the Church and his community, Fr. Al began the ministry of full-time retirement at St. Charles Center, Carthagena, OH, where he resided until his death. He is survived by one brother, Leonard Herber of Fort Wayne, IN and many nieces and nephews. He was preceded in death by his parents; two brothers: Fr. Leo Herber, C.PP.S. and Eugene Herber; two sisters: Donna Woenker and Carolyn Herber.
A Vigil Service will be on Monday, October 16th at 7:00 p.m. at St. Charles Center. The Mass of Christian Burial will be celebrated at 2:00 p.m. on Tuesday, October 17th at St. Charles Center, with Fr. Richard Bayuk, C.PP.S. presiding and Fr. Phil Smith, C.PP.S. as homilist.