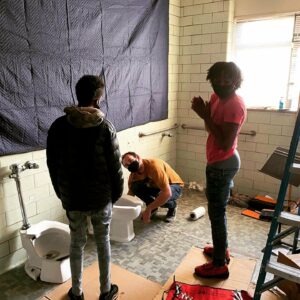 Thomas, center, working with others to set up a recording studio in a former bathroom at PBMR

I’m getting better at this. Summarizing, synthesizing, selecting particularly poignant moments laden with “spiritual significance.” My parents ask me to do this when I visit home. We sit around the kitchen table fidgeting with our coffee mugs and they, God bless them, ask me questions as if I’m returning from overseas. My friends on Chicago’s north side hush their voices when they ask me about my work day, like we are passing notes in the back row of middle school algebra. I hope Ms. Hopewell doesn’t catch us! Or, put on the individual level, it’s like a child flipping through the pages of forbidden fiction beneath the bedsheets, flashlight in a vice grip between incisors. The (mostly white) circle into which I was born is undeniably fascinated with my work, just a minute fraction of the labor Precious Blood clergy, lay workers, and Companions devote toward the ultimate renewal of the world. Needless to say, I am gladdened by their fascination. Many are even fascinated enough to offer generous donations, and for this, of course, I am delighted.

And yet, there’s a nagging dissatisfaction when the evening ends and I am alone. At the end of it all, I do not want your money: I want your allegiance.

The most outspokenly Catholic kid in my class at college proudly toted a MAGA hat around campus. His sweaters were Burberry, his shoes Sperry’s, his parka made from goose feathers. I believe he is now discerning the priesthood. After the shooting in Kenosha, another young lady from my college made sure to let me know that Jacob Blake was a rapist, and that Black Lives Matter’s founders were Marxists not to be trusted. She later invited me to Mass the following evening.

Let me be clear: I am not exempt from my own criticism. My parents gave me a car, debt free, on my sixteenth birthday. I attended highly privileged high school and university, never having to work a job outside of class to keep myself afloat. I went to summer church camps with water slides and power boats.

I’ve been to Europe on four different occasions. My family has vacationed in Mexico, Chile, Argentina, and Alaska. My story bears the indelible mark of unapologetic privilege.

I suppose that’s why I felt I felt like Saul on the road to Damascus last month, walking down Michigan Avenue.

A few of the boys I mentor at PBMR wanted to drive downtown to Millennium Park to see the Christmas lights. As we walked toward the park, we saw an old man, homeless, sitting on the sidewalk, his back curled up against the concrete retaining wall that runs along Michigan Avenue. The man was singing, wailing, head tilted up into the yellow street lights, colored intermittently with the red beams of brake lights. He jingled the coins in his Big Gulp like a tambourine.

One of the young men raced ahead of the group and dropped half of what he had in his pocket into the man’s cup. Another of the young men droped in a few bucks as we passed. They told him to stay safe and we walked on toward the Christmas tree. “Man, I just hate to see people like that,” one of them said to me. “If I make it to college, I’m going to open a homeless shelter. I hate to see people like that.”

I was dumbstruck by the unbridled Catholicism of these young men, neither of whom were religious. Both boys would be considered “poor” as we commonly understand the label. Yet, there they were, giving away their few and precious resources to a man they have never met before. I saw a mixture of the Good Samaritan and Mary Magdalene, anointing Jesus’ feet with her precious perfume.

Jesus was for the poor; this much is obvious. What I find to be often forgotten is that Jesus was poor. “It is easier for a camel to pass through the eye of a needle than for someone rich to enter the Kingdom of God.” Jesus tells those of us with two tunics to give one away to those who have none. As if this were not explicit enough, he says to do the same with food. Fundamentally, Jesus means that to be for the poor is to break bread with the poor. It means giving beyond what makes us comfortable. It means giving $10 to a homeless man on Michigan Ave when you have $20 in your pocket. I ask myself daily what it means for me, and I ask the same of you.

To give a sizable amount of cash can change lives. It ferries resources into resource-scare areas. It opens doors which were formerly closed. But the real act of service stems from the realization of equivalence: just as Christ “emptied himself ” and took on the flesh of us sinners, we must realize our kinship with the beaten, hungry, weary, and alienated. Though we are not Christ, together we might become like Christ through allegiance to one another. This is the call of Christ, not toward judgment, skepticism, and cowardice, but toward radical hope, healing, and hospitality.

We—the privileged, the well-fed, the comfortable—risk the fate of the Pharisees if we do not soon recognize that Jesus’ teaching explicitly commands us to eradicate the existence of privilege. The ball is in our court, and the stakes are high. I pray that we, stirred by courage and humility, may sift through the distractions and delusions which obscure the substance of the Gospel: “Anyone who wants to save his life will lose it; but anyone who loses his life for my sake will find it.”

This reflection originally appeared in the January 2021 edition of the “New Wine Press.”