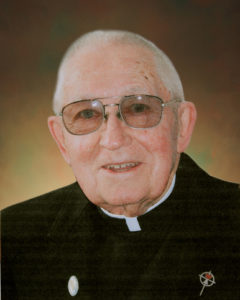 Father Bernard (Ben) Diekhoff, C.PP.S. of the Kansas City Province of the Missionaries of the Precious Blood died on Saturday, January 7, 2017, at St. Charles Center in Carthagena, OH. He was 95 years old.
Father Ben was born on March 11, 1921 in Indianapolis, IN to Louis J. and Etta (Sheets) Diekhoff. He entered Brunnerdale Seminary in Canton, OH in September, 1935 and made Temporary Incorporation on December 8, 1939 at St. Joseph College in Rensselaer, IN. He was Definitively Incorporated as a Missionary of the Precious Blood on December 3, 1942 at St. Charles Seminary in Carthagena, OH, and Ordained to the Priesthood at St. Charles on May 15, 1947.
In his first assignment as a priest as parochial vicar at St. Joseph Parish in Hamilton, OH, Father Ben began a ministry that would mark most of his almost seventy years of priesthood. “I walked the sidewalks to visit parishioners,” he said in an interview for The New Wine Press in 2007 when he celebrated his 60th anniversary of ordination. In December 1952, Father Ben was transferred to St. John the Baptist Parish in Glandorf, Ohio. After he left Glandorf in 1955, Father Ben worked with diocesan priests at St. Peter’s parish in Mansfield, OH, before moving to St. Joseph Church in Wapakoneta, OH in June 1957, where he spent six years. As he did in his previous assignments, Father Ben taught religion in the grade school and high school, while also finding time in the evening to visit parishioners.
In the summer of 1963, Father Ben’s first assignment as pastor took him from Ohio to western Kansas. When he arrived at St. Raphael’s Church in Syracuse, KS, he “reveled in being able to see miles upon miles down the road,” Father Ben said in 2007. “The quiet, moonlit nights had a way of soothing my soul. It was peaceful on the plains of Kansas.”
Father Ben continued to cultivate his ministry of home visits during the five years he served as pastor in Syracuse and its mission thirty miles to the south. In 1968, Father Ben moved from western Kansas to North Dakota to begin his longest stint as a pastor, ten years at St. Anthony Parish in Linton. “The visitation and blessing of parishioners in their homes became an even higher priority for me,” Father Ben said. One of his fondest memories of Linton was the “sizable number of parishioners at Daily Mass and their love of singing at these Masses.” Father Ben loved to sing and his beautiful rendition of “Danny Boy” in honor of the first provincial of the Kansas City Province, Father Danny Schaefer, became a highlight of provincial assemblies through the years.
In 1978, Father Ben moved to Nebraska City, NE as pastor of St. Benedict Church. Though he spent only two years there, he continued to enjoy visiting parishioners and sharing evening meals with the Precious Blood priests serving at St. Mary’s parish in Nebraska City.
Father Ben became chaplain at the Motherhouse of the Adorers of the Blood of Christ in Wichita, Kansas in 1980. During those seven years, Father Ben worked with the sisters on peace and justice issues, “attending vigil-light services to protest unfair practices or the injustice and horrors of abortion, and marching in the streets for charitable causes.” The ASC sisters not only engaged Ben in social justice activities, but also impressed him with their care for one another.
While always a primary focus of his priesthood, the ministry of visitation and compassionate presence became central in Father Ben’s life when he moved to St. Anthony Parish in Park Falls, WI as associate in 1987 and later at St. Francis Xavier Parish in St. Joseph, MO as senior priest in 1990. While in Park Falls, he visited more than 600 families. In St. Joe, that number of families Father Ben visited exceeded 1200. Father Bill Walter, C.PP.S., who has served at St. Francis Xavier since 2007 said parishioners still talk about Father Ben’s visits.
It was in St. Joseph when his life-long love affair with the golf reached its peak. On October 9, 1996, Father Ben recorded a hole-in-one. “There was something very special about that shot, about its accuracy (some say luck) with which it was executed,” Ben recalled. “Using a seven wood on a par three 135-yard hole, I knocked the ball directly into the hole, no bouncing across nor dribbling on the green. The ball just landed in the hole. That took real skill!”
Father Ben’s greatest skill, of course, was not on the links but in living his faith, in leading others in prayer and celebrating the sacraments, and in visiting thousands of homes of parishioners who experienced his gentleness, kindness and care.
He retired to St. Charles Center in Carthagena, OH in the summer of 2002. As his health allowed, he continued to assist with pastoral ministries when needed and to play golf. But for the past few years, Father Ben lived in the infirmary at Saint Charles where his gentle disposition, his patience and his prayerfulness were an inspiration to family, nursing staff, and members of the community.
Father Diekhoff is survived by his brother Norbert and sister-in-law Rosemary of Beech Grove, IN, and his sister, Rita Ferguson of Indianapolis, nieces and nephews. Visitation will be at St. Charles Center on Wednesday, January 11, beginning at 1:00 PM, with a wake service at 7:00 PM. The Mass of Christian Burial will be celebrated at 2:00 PM on Thursday, January 12, 2017 at St. Charles, with Rev. Joseph Nassal, C.PP.S., provincial director, presiding. Burial will follow at St. Charles Cemetery.
May he rest in God’s gracious peace.