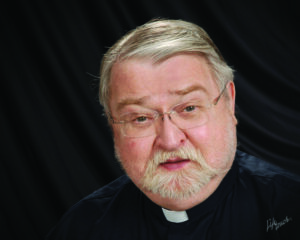 Minister of the Word

On the morning of July 1, 2022, the Feast of the Precious Blood, Alan Hartway wrote, “Today the Missionaries of the Precious Blood rejoice in the mystical wine from the garden of En-Gedi that becomes for us the Blood of Jesus, which animates our community to understand deeply the value of human blood and life in the view of the Father Creator.”

Sometime that evening, Alan died of a heart attack. It is significant that Alan died on our feast day because he was passionate and committed to our charism of proclaiming reconciliation and renewal in the blood of Christ through the ministry of the Word.

Alan had a deep love for scripture and for language. He brought these gifts together in his blog “Vineyards of En-Gedi: Homiletic Explorations into Communion, Community, and Evangelization.” Alan was a brilliant linguist. He knew Greek and could give a detailed explanation to the meaning and context of the scriptures, which enhanced his ministry of the Word. He also had a facility for languages, and for several years, he celebrated Mass in Spanish while also preaching for Unbound. Tim Deveney, director of Precious Blood Volunteers who once worked for Unbound scheduling preachers around the country, told me the staff at Unbound would always look forward to hearing Alan’s recap of his weekend assignment. His review often included colorful highlights of people he met, rectories where he stayed, or incidents that left Tim and the staff in stitches.

No doubt some of his stories were embellished to some degree. Alan took liberal license in his storytelling, believing facts should never get in the way of a good tale! Not that the stories weren’t true. Alan just made a distinction between true stories and truth stories! He enjoyed holding an audience, whether it was the congregation at Mass or students in a classroom, captivated and engaged with details only Alan could deliver.

Alan’s sense of humor, his bible study groups, and his preaching made him popular with his parishioners. On the 40th anniversary of his ordination, Alan penned a letter to the people of Guardian Angels Parish in Mead, Colorado, where he was pastor at the time.

“I largely see the pastoral role as one of being an animator who nudges, pushes, pulls, coddles, enables, encourages, promotes collaboration at every level,” he wrote. “Part of this work is to be the mediator, to bring otherwise distant people together in new ways.”

When he was pastor at St. Mary’s Church in Garden City, Kansas, there was a woman in the parish whose faith and truth-telling he admired. Alan considered her prophetic—not in the sense of seeing visions but rather in speaking truth to power. She was not afraid to tell him the truth, so he invited her to serve on the parish council as the prophetic voice to keep the leadership of the parish grounded in the vision of Vatican II. Alan was deeply committed to the renewal of the church initiated by Saint Pope John XXIII. This, too, is embedded in the charism of our congregation and explicit in the vision of our becoming a new creation as one province of Missionaries and Companions in the United States.

Because of his intellect and his size, Alan was an imposing figure. He could be intimidating. But he welcomed and appreciated those who would stand up to him. He relished a good conversation on important issues confronting the church, community, and society. Of course, his linguistic skills were not only capable of building up but also of tearing down. If you dared to enter a verbal squabble with Alan, you had better wear full body armor because as Cher once famously sang, “Words are like weapons; they wound sometimes.”

He was not afraid to preach about social issues from the perspective of scriptures and Catholic Social Teaching. In the description of his blog, Alan quoted philosopher Reinhold Niebuhr’s famous advice that a preacher should preach “with the Bible in one hand and the newspaper in the other.” One of the more memorable examples of this is when he was pastor at Garden City. An epidemic of gun violence was plaguing the city, so one weekend at all the Sunday Masses, he invited parishioners to bring their guns the following weekend and hand them in to be destroyed. During an altar call that next weekend, several people came forward to relinquish their weapons.

In the last reflection for his blog, Alan wrote: “Life has value for us because it is not about the money, but about relationship.”

Alan loved the community. He was a member of the faculty at Naropa University in Boulder and later was pastor at Guardian Angels in Mead. As a member of the first graduating class at Precious Blood Seminary in Liberty, he wore that distinction proudly.

In February 2020, at one of the last gatherings of the members of the Kansas City Province at our Renewal Center in Liberty, Alan reminded us that he entered Precious Blood Seminary as a freshman in 1963, two years before the American Province was divided into three in 1965 and the Kansas City Province was born. So, when he entered the high school seminary, he was a student for the American Province. Now he will also be remembered as the first member of the newly formed United States Province to die.

In his first assignment, Alan served the community as a teacher and director of seminarians at Precious Blood Seminary. He later was director of formation and director of publications for the former Kansas City Province. For several years, he also coordinated our Provincial Assemblies. He was the coordinator of the Assembly celebrating the 25th anniversary of the province in 1990, and he asked me to write the words of a song to celebrate it. On the day he died, in the closing paragraph of the final reflection of his blog, he referenced the “Song of Liberation”: “In our community hymns we sing of being marked and called by the blood of Christ.”

An Excellent Teacher and Chef

Whether he was instructing high school students at his alma mater, graduate students at Naropa, or adult faith formation classes in parishes where he served, Alan was passionate about education, about expanding hearts and minds. He was especially proud of his time at Naropa, when he was the only Catholic priest teaching at the Buddhist-sponsored university. The study of and the search for common ground among world religious was a ministry of reconciliation for Alan. What can we learn from one another? He had a great reverence for other religious traditions, especially Buddhism, even as he was committed to Catholicism. He understood and practiced the true meaning of “catholic” as universal.

Alan not only feasted on God’s Word but also enjoyed preparing a feast for his friends. The table became a symbol of Alan’s view of how to live in the world. Hospitality, another important quality of the charism of our community, was important to him. There was always room at the table for honest dialogue and the exchange of ideas. He believed placing good food and fine wine in front of people begins to break down barriers.

As a gourmet cook, he loved trying new recipes. Most, like the “tur-duc-ken” (turkey, duck, and chicken stuffed together) he made for Thanksgiving or his beef Wellington, became legendary. But every now and then, his use of spices would cause diners to consume ample glasses of water to put out the fire. One such meal he made with curry when four of us gathered at Estes Park. While Alan was getting something from the kitchen, one of our friends quietly passed grape jelly under the table to cut the curry and calm the fire in our mouths and stomachs.

For several years when Alan was pastor at Garden City, we would vacation in Estes Park. Good friends of his at the parish had a cabin on the Big Thompson River. As I wrote or read on the porch, Alan would be in the kitchen, listening to NPR and preparing a memorable meal. Now Alan finds a place at the table on God’s holy mountain that one of his favorite prophets, Isaiah, envisioned—a table where the Lord of the Feast has prepared a delicious banquet of rich food and fine wines. Oh, the stories that will be told around that table!

So, rest in peace and enjoy the feast, Alan. May the joy of the kingdom you preached and wrote about often be even better than you imagined.