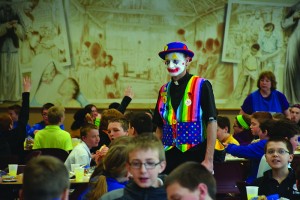 Fr. Timothy Armbruster, C.PP.S. in makeup for his clown ministry.

EPWORTH — Clown ministry is the real deal, delivering the Good News through brightly colored faces and bigger-than-life smiles to young and old alike in many parts of the country. Father Timothy Armbruster, C.PP.S., vocation director for the Kansas City Province of the Missionaries of Precious Blood, brought his clown ministry to the Sixth Grade Vocation Awareness Day, sponsored by the Dubuque Area Vocation Association (DAVA), at Divine Word College, on Tuesday, March 10.
The annual event raises awareness of religious life among the young students as they meet and hear presentations from religious sisters, priests, brothers and a deacon. The majority of young people today have little or no concept of religious life as a vocation, compared to decades past when those who had chosen that path were an integral part of religious education. Nearly a dozen religious communities as well as the Archdiocese of Dubuque were represented at the event, and the theme was one that got down to basics.
“This year, the women’s religious communities talked about prayer, vows, call, ministry and community life. Each community chose a topic,” said Sr. Rita Cameron, PBVM, who helped organize the event. “The men talked about what it would be like if you were an order priest, a diocesan priest, a deacon, or a seminarian.”
As the keynote speaker, Father Armbruster said he got interested in clowning as a young boy, but was introduced to Clown Ministry through a group he joined in college.
“They did Clown Ministry, so when we would meet, they shared with me the theology and meaning behind it,” he said. “Then I got more into it and started doing more reading on my own, as well.”
It starts with the face paint. Standing in the Main Chapel at DWC, he transformed himself before the eyes of the students, beginning with the makeup.
“The clown white is the symbol of death, dying to oneself so that the clown can come alive,” he said. “The colors of the face makeup become a new life, which challenges me to see the world around me in a different way and it invites people to see the world around them in a different way.”
The ministry message could relate to the poor and homeless, sometimes it involves improvisation, and sometimes it involves skits. For example, one year for first reconciliation, his parish did a skit involving three clowns, who performed roles as a narrator, a shepherd and a sheep.
“The narrator told the story of the lost sheep while the other two acted out the scripture story, tying it to reconciliation,” Father Armbruster said. “It’s been six years and some parents still talk about it.”
In this way, Clown Ministry becomes a form of preaching by revealing messages in the Gospels, inviting people to reflect upon the world in different ways. He brings that messaging to young people like those who attended the 6th Grade Vocation Day, who are asked to think about God’s call in their lives.
Being asked to consider religious life is important, Father Armbruster said.
“I’ve read studies which showed a lot of people considered religious vocations, but when questioned why they didn’t act upon it, their answer was, ‘nobody asked me,’” he said. Reflecting on his own life, his parish priest pointedly asked him when he was going to the seminary. He was in the 7th grade and, at that time, there was no way he was going to go that route.
“But, for me, it was what got the seed planted and got me thinking about it,” he said. “It took me another eight to ten years to do anything about it, but the seed was planted.”
And now Father Armbruster is planting those seeds, and doing it with the colorful, ever-smiling face of a clown.
This story is provided courtesy of The Witness, the official publication of the Archdiocese of Dubuque.[/fusion_builder_column][/fusion_builder_row][/fusion_builder_container]