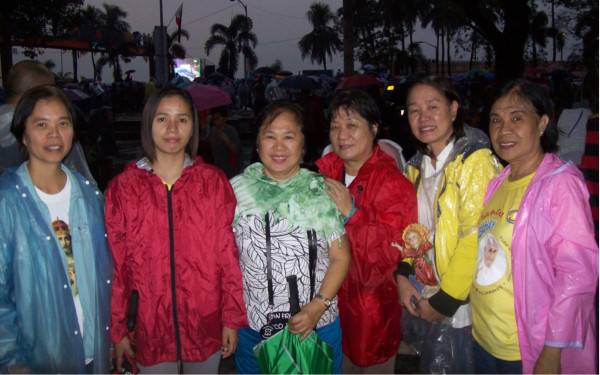 Since October 2014, the Church had prayed for the Papal visit at the end of every Mass. Life-size cardboard cutouts of the Pope were distributed to churches, Catholic schools, and other venues to allow people to take selfies with the Pope.
The media counted down the time until Pope Francis’ visit. People practiced songs and dances; they worked hard sewing vestments the Pope and other priests would wear. We were taught protocols, such as how to dress if we were going to see the Pope. We were told to kiss the Pope’s ring if we were Catholic. Manila schools and offices were closed. Everything was done in honor of this visiting dignitary.
About two weeks before Pope Francis came, I contacted a friend to see if any church group from St. Mary Magdalene would attend. As a child I had seen Pope Paul VI when he was here. Even though I knew it was insane to want to go and mingle with the crowd, I still wanted to go.
Early afternoon on Sunday, January 18th, Ruth, her sister Fely, her cousin Frocy, her cousin’s friend Rose, Ruth’s niece Charen, and I joined the 6 million to listen to the Pope on his last full day in the Philippines. There were puddles all over and no way to avoid them. It was cold for the Philippines. Finally, we arrived in front of a travel agency, the closest we could get to Luneta. We attended Mass via a huge TV screen.
Many around us wore T-shirts expressing love for Pope Francis. They were very respectful; there were no side conversations. Almost two hours later Mass ended and there was an announcement asking us to stay put so the Popemobile could pass by safely. Around and around they drove, while the Pope made the sign of the cross in the air giving us his blessing. We chanted, clapped, waved handkerchiefs: “Papa Francisco, Mahal ng (loved by the) Pilipino.” It was awesome!
Rose wanted to see the Pope because it was like seeing Jesus Christ Himself. I wanted to feel his holiness because he loves us. For Rose the most important message from the Pope is to give our love to others, to love and to be loved, to see the presence of the Lord in others and have His presence seen in us.
Frocy is a U.S. citizen who returned to the Philippines last year to take care of her mother. She wanted to see the Pope because he represented God. The most important message from the Pope for her is we should always think of the poor. Frocy said that when there’s waste, we’re stealing from the poor.
Fely, who lives in Georgia and is also a U.S. citizen, wanted to see Pope Francis. Even though she isn’t Catholic, she wanted to see the Pope because he is a representation of God the Father. For her the most important message the Pope gave was compassion for the poor. She hoped his words touched the hearts of the officials in the country.
Charen is the baby in the group. She wanted to see the Pope so that she could receive his blessing. For her, the Pope’s message on the importance of women hit the spot. She feels women are more responsible than men.
Ruth wanted to see the Pope because she hopes for people to have a change of heart, mind, and deed. For her the most important message from the Pope is for a cleansing of oneself and one’s soul. Ruth mentioned the child who cried as she gave her testimony: Ruth had a similar experience. When you cry you become braver, wiser, and more humble.
Thank you, Pope Francis for spending a few days with us. Thank you for reminding us that Christ lives among us in the streets, in the infirm, in the locked gates of affluent communities. Thank you for empowering us to live out our baptismal calling. Thank you for challenging us to be the ones solving our country’s problems. We await your return to our shores.