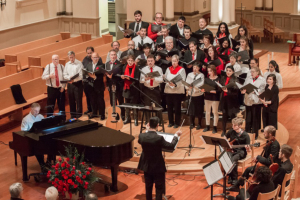 by Trudy Miller, Newark, California Companion
In the midst of the pre-Super Bowl frenzy going on Saturday evening, February 6th, there was an oasis of beautiful music and peacefulness in San Francisco at Most Holy Redeemer (MHR) Church. This beautiful music was “Embraced by Mercy,” an evening of music and reflection with Dan Schutte and the 4-part choir and instrumentalists of MHR.
Dan was in concert at MHR on Super Bowl Eve playing guitar and piano, and singing some of his “oldies but goodies” that we’ve sung at mass for many years—“City of God,” “Table of Plenty,” “Though the Mountains May Fall,” among others. Dan also introduced us to some of his newer compositions, my favorite being “Oh God, Be The Music.”

The audience was invited to sing a long with Dan and the choir, and sing we did–14 songs for over two hours.   Dan introduced each song by explaining how the song “came to be.” For instance, he said he was asked on a Wednesday to write a song for a diaconate ordination on Saturday, and “Oh, by the way, we need it for the choir to practice on Friday!”   But write it he did, and we’ve enjoyed “Here I am Lord” ever since.
Dan has been composing music for more than 40 years, and was one of the founding members of the St. Louis Jesuits who popularized a contemporary style of church music set to sacred texts sung in English as a result of the liturgical reforms initiated by Vatican II. He is now composer in residence at the University of San Francisco.
Kudos to Fr. Matt Link, C.PP.S, Pastor of MHR, and Victor Cervantes, MHR Music Director, for arranging a truly enjoyable and uplifting evening.