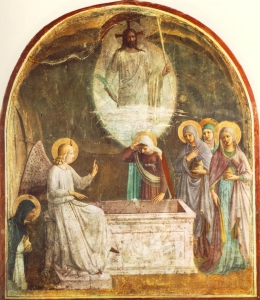 “Why do you seek the living one among the dead?”
Dear Friends,
When the women went to the tomb at daybreak that first day of the week, the first question they heard from two men dressed in “dazzling garments” were these, “Why do you seek the living one among the dead?” In the wake of the bombing in Brussels during Holy Week that adds to the geography of graphic violence that has marked the map of the world from Paris to San Bernardino, from Newtown to New York, from Charleston to Littleton, from Oklahoma City to Chicago with blood, the question, “Why do you seek the living among the dead?” is the one that motivates first responders.
In the aftermath of terrorism, first responders look for the living among the dead. They seek movement of limbs amid the carnage. They search for a pulse in a person buried beneath the ruins. They do triage as they try to keep the wounded alive until more help arrives. First responders look for the living among the dead as they seek to save another human being so that another name will not be added to the endless roll call of victims of violence.
The women who came to the tomb on Easter morning were the first responders to the resurrection. They had seen the violence; they were witnesses to the torture and execution of Jesus; they watched where the body was buried. So they went to the tomb that morning expecting death, to pay their respects, anticipating they would anoint the body of their beloved.
These women thought they were doing a work of mercy: to bury the dead. But as it turns out they were doing something even more important: they were being the first responders to the most remarkable and significant event in history—the resurrection of Jesus Christ. Though “their story seemed like nonsense” to their male companions still hiding in fear, these women persisted in being passionate about becoming a new creation even in the face of those who “did not believe them.”
First responders have a difficult, dangerous and depressing duty to search for the living among the dead in the aftermath of terrorism or tornadoes, natural disasters and tragic accidents, hurricanes and human acts of evil. The debt of gratitude we owe them is beyond measure. But as first responders to the resurrection, those women show us how we too are called to go to places where death has a grip and release that grip by being a living, healing presence.
As first responders to the resurrection, we are called to be people of life in a world where there is so much death, so many catastrophes caused by hate, so many threats of violence, so much rhetoric about retribution, exclusion, and revenge. My friends, our Easter challenge is clear: we are the first responders to a new way of being human, a new way of being alive, a new creation in a world where the ravages of violence continue to scar the face of the earth.
May we respond to the challenge with the hope of the first responders to the resurrection!
With Easter peace,
Joe Nassal, C.PP.S.
Provincial Director