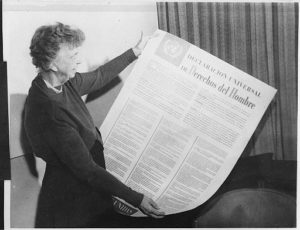 Today we commemorate the 70th Anniversary of the Universal Declaration on Human rights which was adopted by the United Nations General Assembly on December 10, 1948 .  This declaration is just as essential to peace and justice now as it was when it was adopted.  It continues to be both a guide to present action and an evolving set of ideas for future human rights agreements among nations, individuals,  and non-governmental groups.

The 30 articles of the Declaration begin with Article 1: All human beings are born free and equal in dignity and rights.

As members of the Precious Blood family, we recognize the significance of this anniversary and the power that this document still exerts.  Over the last 70 years the Universal Declaration on Human Rights has been a great source of inspiration for those who work on nonviolence.  It motivates many to expand the understanding and protection of human rights around the world.

Read the text of the Declaration of Human Rights here.