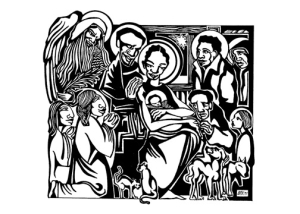 Image from The Hartford Catholic Worker

Over the last few years politicians in the United States have repetitiously used the phrase “class warfare.” The way the rhetoric is bandied about doesn’t stand up well to the factual test of how resources are distributed in our country and in our world. The reality is a deeper chasm between the richest and the poorest.
The gap between top earners and lower income earners continues to widen both domestically and globally. The voices of the marginalized becomes harder to hear when their life experiences are further away from those who have the bulk of the world’s resources. Sister Simone Campbell once said it is not that the wealthiest don’t care about the poor, it’s that their reality is so far removed from them they have no idea as to how they live.
The story of Jesus’ conception and birth places God in the midst of the marginalized. Every bit of the story is an undermining of the order the Roman imperial system, the religious authorities, and the wealthy have worked so hard to preserve. Some might even call this class warfare. It has relevance today because God still comes to us in the midst of people who are left to the side because of their skin color, gender, sexual orientation, disability, or just because of where they were born. It’s a story of the powerful becoming low and coming to the lowly.
It starts with an unwed and (most-likely) teenage woman who says yes to God. She channels Hannah from the first book of Samuel (2:1-10) and gives glory to God for the good God has done in her life. Within her song of praise mercy is given, the lowly are lifted up, the hungry are filled, and God’s covenant with Abraham’s descendants is renewed.
The narrative continues on with Joseph and Mary having to travel from a place once questioned if anything good can come from it to a backwater called Bethlehem. Jesus is laid in a feeding trough, not a bed. The first people to learn of his birth were shepherds, stinky shepherds, who were viewed as low on the rungs of society.
God is found among the lowly and the hungry and we to find God we need to place ourselves with and among them. We can find Jesus in an unmarried pregnant teenager in first century Palestine and we can find him in the same place in an unmarried pregnant teen in Kansas City. If God’s presence is announced first to people considered to be low class by society then we can find God among people considered low class in our society. If the Messiah can be born in Bethlehem and grow up in Nazareth then we can find a savior east of Troost or in a small dying town in rural Missouri. If God can be found in those places we can find our King at a health clinic, a high school for poor kids, a food pantry, or living in public housing.
Questions for Reflection