by Margaret Haik, Director of Communications 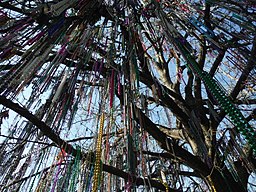 I went to school in New Orleans and my husband is from there. When people say, “You must have loved Mardi Gras,” I hesitate for a moment. Mardi Gras in Louisiana has three varieties: Burbon Street, Uptown, and the suburbs. Burbon Street is generally what non-residents of the region think Mardi Gras is like. I hated that version. Too many people, too much alcohol, too many tourists. Uptown is where the city-dwellers celebrate and since there are plenty of college students thrown into the mix, it’s similar to the Burbon Street version, just slightly calmer.

The suburban version of Mardi Gras is family oriented. My husband’s grandmother, Memaw,  lived along the main parade route in Metairie and we would arrive at 7 a.m. for breakfast, then go watch a parade. There were tons of little kids in specially-made seats that bolt to the top of A-frame ladders so they can see the floats and bands. After one parade, we’d go back to Memaw’s house for lunch, then out to another parade. This would be the pattern for the day. The older folks would hang out at the house and play penny-ante poker and watch the littlest kids while they napped.

Lovely as that version of Mardi Gras is, my favorite part of the season was Ash Wednesday in Uptown New Orleans. “Favorite” might not be the correct word. Spiritual? Profound? I’m not sure, but here’s why it could be all those things: the city goes silent on Ash Wednesday. The tourists leave town, and residents who escaped the craziness of last four days of the season don’t return until Friday, generally.

If you were an alien dropped into Uptown on Ash Wednesday, you’d know something big had happened. The trees are dripping with plastic beads like a forest of rainbow colored weeping willows. But that visual contrasted with the quiet is the most amazing part. Following weeks of marching bands, people calling to the parade riders for beads, horns honking from cars stuck in the traffic, it is a cue for the quiet reflection needed during Lent.

Last month, we witnessed an insurrection in Washington, D.C. A week later, all was calm in the Capitol as the new administration was sworn in. The contrast of noise versus quiet reminds me a little of the contrast between Mardi Gras and Lent.

My prayer is that moving forward, we embrace a time of quiet reflection, both personally and as a nation. May this be a time to cleanse ourselves of the attitudes that create division. May it lead us all to a place of hope and peace as we move toward Easter.