Celebrating 50 Years: Sowing the Seeds for a New Province

by Fr. Joe Nassal, C.PP.S., Provincial Director
2015 marks the 200th anniversary of the founding of the Missionaries of the Precious Blood and the 50th anniversary of the Kansas City Province. This year, the New Wine Press will trace some of the significant events that have shaped the first fifty years of the province.
We can trace the beginning of the Kansas City Province to a Business Chapter of the American Province on April 17, 1963 at St. Charles Seminary in Carthagena, Ohio. There were several other items on the agenda for this meeting, including a revision of the Manual of Prayers and the admission of lay students to the new high school seminary being opened that fall in Liberty, Missouri, but the division of the American Province was no doubt what Father John Byrne, provincial director, had in mind when he told the delegates in his opening address, “What is decided here today will affect the course of the American Province. Truly, this is an historical meeting as well as a momentous one.”
[fusion_builder_container hundred_percent=”yes” overflow=”visible”][fusion_builder_row][fusion_builder_column type=”1_1″ background_position=”left top” background_color=”” border_size=”” border_color=”” border_style=”solid” spacing=”yes” background_image=”” background_repeat=”no-repeat” padding=”” margin_top=”0px” margin_bottom=”0px” class=”” id=”” animation_type=”” animation_speed=”0.3″ animation_direction=”left” hide_on_mobile=”no” center_content=”no” min_height=”none”] 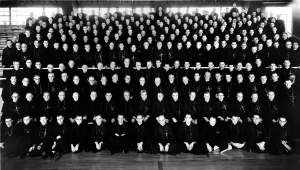 Last Assembly of the American Province

By 1963, the American Province had grown to 650 members. From casual conversation over coffee or the pinochle table, to official district meetings, members had discussed the division for several years. But on April 17, 1963, the 52 delegates elected by districts and including the provincial and his council and the superiors of the major houses, voted to “give the provincial and his board the required consent to make a proposal of a division of the province to the proper ecclesiastical authority.”
In reviewing the minutes of the discussion, it appears there was an overwhelming consensus that it was time to divide the American Province. “Division of the province is a most important move,” said Father Neidert, representing the Falls Church, Virginia district. “It is the only way we can take up the challenge given us by the Holy Father to carry devotion of the Precious Blood further.” Father Aloys Selhorst, a Precious Blood missionary “from the new frontier of the west coast” representing the San Francisco district, said “the burden of distance placed upon the provincial superior in visiting outlying districts…makes division of the province mandatory.”
Following the affirmative vote, the provincial council appointed a Commission for the Division of the American Province. In announcing the commission, Father Byrne wrote that the commission would be responsible “to study, poll the members and make recommendations to the provincial council concerning division. The provincial council would then review these recommendations, approve or refine them, and make the formal proposal to the General Curia.” Father Byrne indicated that the process could take two years.
During the work of the commission, several suggestions surfaced on how to divide the American Province, including placing all the educational institutions in a separate province and dividing the province according to ministries. But in the end, the most practical way to divide the province into three was geographically. The Kansas City Province included the Midwest, from Illinois and Wisconsin in the east to Colorado and New Mexico in the west. There was some debate that the division between the Cincinnati and Kansas City Provinces should be the natural boundary of the Mississippi River, rather than include both Illinois and Wisconsin in the Kansas City Province. Among the reasons the commission outlined for their decision were a more equitable distribution of personnel; better vocational sources; and balancing the “preponderant rural elements” while assuring “better financial support.”
[/fusion_builder_column][fusion_builder_column type=”1_1″ background_position=”left top” background_color=”” border_size=”” border_color=”” border_style=”solid” spacing=”yes” background_image=”” background_repeat=”no-repeat” padding=”” margin_top=”0px” margin_bottom=”0px” class=”” id=”” animation_type=”” animation_speed=”0.3″ animation_direction=”left” hide_on_mobile=”no” center_content=”no” min_height=”none”] 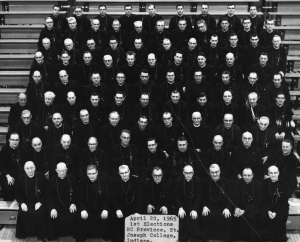 The commission also discussed at length whether the division of the American Province should be two provinces or three. According to the commission’s report, “The arguments adduced for further division of the territory beyond Cincinnati and Kansas City to the Pacific” include “distances are not reduced appreciably with simple division East-West; not only do the Rocky Mountains afford a natural geographic barrier, but there is a very different mentality, progressive spirit, and vitality that is unique; and opportunities for growth are unlimited.” The commission concluded that “if only Kansas City, emphasis naturally will be directed to the West Coast” and this “would mean stagnation for the Kansas City Province.”
These boundaries held until 2006 when the 29th Provincial Assembly of the Kansas City Province voted unanimously to “petition the Moderator General, his council, and the major superiors of the Congregation to enlarge the boundaries of the Kansas City Province to include the geographical region of the Continental United States lying in the States of Wisconsin and Illinois and in the area lying west of the Mississippi River.”
On the Feast of St. Gaspar del Bufalo, October 21, 1964, after extensive surveys of the members, the Commission for the Division of the American Province proposed dividing the existing Province “into three distinct provinces with an additional Parent Corporation to stabilize the financial situation of the three new Provinces.” The Provincial Council approved the proposal. On December 31, 1964, the Provincial Council petitioned the Moderator General and General Curia to divide the existing American Province into the Cincinnati Province, the Kansas City Province, and the Province of the Pacific. The General Curia approved the motion on January 22, 1965, and on February 5, 1965, the Sacred Congregation for the Affairs of Religious authorized the division. In a letter dated February 25, 1965, Fr. Byrne called the announcement of the division of the American Province “the most historical news report to hit our Community since Father Brunner sailed up the Mississippi.”
The date for the official division of the American Province was set for April 20, 1965.
Next month: The Birth of a Province.[/fusion_builder_column][/fusion_builder_row][/fusion_builder_container]