Advent Day of Reflection #2: Those Who Wait in Hope 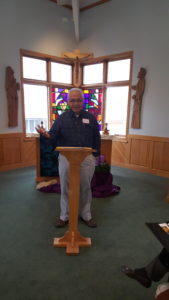 by Kathy Keary, Kansas City Companion
Gabino Zavala, the Kansas City Province’s Justice and Peace coordinator, led our second Advent Day of Reflection on December 10th at Precious Blood Center in Liberty.
Gabino shared touching personal stories of hope. One such story occurred when he was a baby. His family was caught in fire in a theater in Mexico. His father and sister were unable to escape. His mother was severely burned and spent months in a sanatorium. Once she recovered she faced the daunting task of being a single mother of her five living children. They eventually migrated to the United States where his mother found employment. She did not lose hope as she was certain that God was with them in their struggle. It is this same hope that motivates the refugees of today.
Hope requires patience, perseverance, trust in God, an understanding of our God, and a belief that God will not abandon us. It allows us to know that what seems impossible is actually possible. In life, we can chose pessimism or possibility. Hope, a gift of the Spirit, allows us to experience the power of God and to be confident in our faith. It invites us to conversion, gives us a voice, and enables and empowers us even when we feel overpowered or paralyzed. We are called to be agents of hope in the world with masses of people overwhelmed by their reality. Jesus is our role model who ministered to the least, the lost, and the last.
Gabino also shared stories from scripture and history that spoke to the virtue of hope. One such story was the beautiful account of Our Lady of Guadalupe. Our Lady appeared to Juan Diego ten years after the Spanish had conquered the indigenous people in Mexico. The indigenous people had lost all hope as the Spaniards tried to stomp out their spirituality in an attempt to convert them to Catholicism. Because of their undesirable means to change the people, little success was achieved. Our Lady appeared in 1531speaking Juan Diego’s native language and looking like an indigenous woman versus the typical European image of Mary. She respected the dignity of the people unlike the treatment rendered by the Spaniards. Our Lady’s appearance gave the people hope, and conversions to Catholicism followed. Instead of the forceful means of the Spaniards, Our Lady humbly came to them as one of them. She stands as a beacon of hope not only for Mexico but for all of the Americas.