A Cloud of Witnesses: Memory, Joy, and Hope in Vietnam 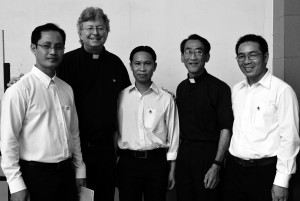 Three images from our recent visitation of our members and candidates in Vietnam are etched in my memory: the joy on the faces of Joseph Phung Van Ky, Vincent Vu Thai Hoa, and Paul Pham Xuan Anh Hao as they became Pledged Candidates; the celebration at the Pastoral Center in Saigon where thousands of religious women and men serving in Vietnam gathered to celebrate the Year of Consecrated Life on February 2; and the hospitality we received throughout our visit, not only from our members and candidates but from the families who opened their homes to us.
One of the first things you see entering a Vietnamese home is an altar honoring the family’s ancestors. These altars are often elaborate and ornate, decorated with vigil lights, flowers, incense, and pictures. This communion of saints, which the Letter to the Hebrews calls “a cloud of witnesses,” offers a sacred connection and occupies a holy place in every home. As the incense rises on these domestic shrines, it is easy to envision how this cloud of witnesses is caused by people on fire with love, on fire with a passion for peace and prayer, truth and justice. These are the ones the great mystic, Catherine of Siena, must have been referring to when she advised, “Be who God meant you to be and you will set the world on fire.” As Members, Companions, and Volunteers of the Precious Blood, our common challenge is to set the world on fire by being faithful to the call of God that we have heard in our hearts.
We saw this fire in the gathering of religious at the Archdiocesan Pastoral Center in Saigon on February 2 as thousands gathered to commemorate the Year of Consecrated Life. Scanning the large crowd, the most notable feature was youthfulness. The old adage, “youth will be served,” is turned on its ear in Vietnam as young religious serve the country. Under a blistering sun and 95 degree temperatures, the young religious, seminarians, and candidates, many of whom were clad in cassocks, veils, and habits, broke into song and dance at various intervals. Many of the songs were accompanied by gestures, and though I did not understand the language or the lyrics, the energy and enthusiasm were genuine. The oppressive heat was not a detriment to the dream of religious life expressed by these young religious. Indeed, the fire in the sky mirrored the fire on the grounds of the Saigon Pastoral Center. 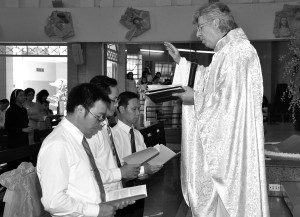 My favorite memory from our time in Vietnam is the joy on the faces of Joseph Ky, Paul Hao, and Vincent Hoa when they became Pledged Candidates on February 7. In meeting with each of them individually during the week prior to the ceremony and listening to their stories of responding to God’s call, I was deeply impressed with their depth of knowledge and understanding of Precious Blood spirituality and the charism of St. Gaspar. Brother Daryl Charron and I stayed with these candidates, Peter Tam Hoang, and Fr. Dien Truong at Xavier House, our new formation home. Our Members and Candidates were most hospitable, and showed they are steadfast in prayer and presence.
Ky, Hao, and Hoa bring a wealth of gifts to the Precious Blood community and the Church in Vietnam. They each bring a passion for art, law, and music, and are very gifted in living their passion. But even more important than their passion is their compassion for those who are poor or weak, those who are imprisoned in body, mind, or soul, and those who are on the margins and edges of society, which is where our founder would want us to be.
The clouds that form from our brothers and sisters in Vietnam, these witnesses who are on fire with God’s love, compassion, and peace, hovers over the landscape and signals to all that where there is smoke, there is fire. Not the fire that destroys but the fire that dares to draw others near to the love of God.
In cloud terminology, there is something called a halo effect which appears as a thin circle surrounding the sun or moon formed by ice crystals in cirrus clouds. Since we often associate a halo with saints, as Missionaries of the Precious Blood the challenge for each of us as we seek to take our place in this cloud of witnesses is to remember we are raised to a high altitude only when we take the lowest place. When the fire of God’s mercy and compassion has removed the weight of our sin, the cloud formation reflects God’s redeeming grace. The cloud of witnesses captures a belief in the expansive love of God for all peoples.
We experienced this expansive love on the Sunday following the Pledged Candidacy ceremony as Fr. Lac Pham led us on a pilgrimage to the northern part of the Mekong Delta region where we celebrated Mass at a small mission church bursting at the seams with new converts, and met many families in the surrounding villages as we experienced their remarkable hospitality. As the Vietnam Mission continues to discern its future vision and mission, this region of the Mekong Delta offers one possibility for expanding our ministry with those on the margins.
Reflecting on the commitment of our young brothers in Vietnam, I recall a song we sang at Morning Prayer during the cmsm meeting in Nashville a couple years ago. “Here Am I” by Brian Wren reflects God’s call to gather at the table of God’s Word and Sacrament:
Here am I, where two or three are gathered,
Ready to be altered, sharing wine and bread,
Here am I, where those who hear the preaching.