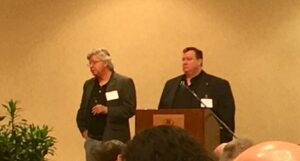 Fr. Jeffrey Kirch, C.PP.S., was elected the first provincial director of the United States Province of the Missionaries of the Precious Blood, during the Missionaries’ assembly in Indianapolis today.

Fr. Kirch will lead the United States Province for a term of four years. He previously served as the provincial director of the Cincinnati Province.
“It’s a privilege to be asked by my brothers in Community to lead the Congregation in the United States as we begin this important part of our shared life,” Fr. Kirch said. “I’m looking forward to working with Missionaries and Companions as we seek to bring to fruition Gaspar’s dream, as well as our dreams. I’m looking forward to continuing to build our relationships in the bond of charity and hearing from one another our hopes and dreams for the future of the Congregation.”
Fr. Kirch thanked the leadership of the two provinces for their efforts to form the new province. “So many people have poured their lives into the mission of this Congregation throughout its history. And that continues,” Fr. Kirch said. “Thinking about all the work that went into this process so far, I’m grateful to the two provincial councils for getting us this far. But we don’t stop here. The work is just beginning. Our task now is to become new wine in new wineskins.”
The new United States Province was created during Morning Prayer at the assembly today. Br. Juan Acuna, C.PP.S., secretary general read the decree from the general council, which had approved the formation of the new province at their meeting on June 12, the anniversary of the canonization of St. Gaspar del Bufalo.
Elected as vice provincial director and first councilor of the new province was Fr. Joseph Nassal, C.PP.S. Fr. Nassal served as the provincial director of the Kansas City Province from 2011 to 2019.
Fr. Emanuele Lupi, C.PP.S., moderator general, opened the electoral assembly after Morning Prayer.
He reminded the Missionaries that the assembly is “the highest authority of the province,” and that the leaders they choose will “reflect the will and dream of the province. These leaders will be representing you, and they will represent the authority, the dream, and the will of the members of the province.”
“This is a historical moment: the first leadership of the new province. This leadership has to plant the roots for the future. We need to seek the spirit of the Lord to be upon us and to express from the truth of our hearts those names that we think will be the best to lead this province in this moment, at the beginning of the new chapter.”
Elections for three additional councilors will continue at the assembly on Thursday.
Meeting with Companions on Wednesday afternoon, Fr. Lupi told the Companions that they were a vital part of the Congregation. In them, the Missionaries can see their own commitment and love of the C.PP.S.—and vice versa. “We are a mirror for each other,” he said.
“Thank you for loving this Community, which I love—and I think it is the best community in the world,” he said.
During a liturgy on Wednesday evening, Lisa Alkier, St. Joseph, Missouri, made her first covenant and 21 Companions renewed their covenants. In their individual covenants, the Companions wrote of their commitment to the Congregation and to the Precious Blood spirituality that it brings to the world. Companions join in the mission and help expand the ministry of the Congregation.
Please pray for the Missionaries of the Precious Blood this week as they step into their future in faith.