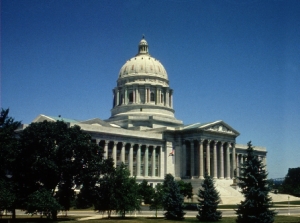 Missourians for Alternatives to the Death Penalty spokesperson, Staci Pratt, informed me that February 8th marked an historic occasion in the Missouri Senate. It was the first time a floor debate took place to consider a death penalty repeal bill since 1974. A devout Catholic and consistent supporter of life, Senator Paul Wieland offered S. 816 for approval to the full Missouri Senate. Wieland indicated that as a fiscal conservative, he did not see that the death penalty makes effective use of taxpayer dollars. Further, it fails to deter crime and has not been applied equitably.
Other Senators echoed his concerns. No other state program would be permitted to hand over sacks full of cash, without oversight. The theme presented by the cosponsors highlighted Missouri’s failure to implement the death penalty in a fair and impartial manner. They emphasized deep concerns over racial and geographic disparities as well as fundamental flaws that lead to the conviction of innocent individuals. Prosecutorial misconduct and inadequate legal representation were also discussed and debated. It was pointed out that the exoneration of individuals such as Clarence Dexter, Eric Clemmons, Joseph Armine and Reggie Griffin, previously held on Missouri’s death row, demonstrated deeply troubling failures in Missouri’s capital punishment system. Let’s hope this bill leads to further debates and hopefully someday be brought to vote to repeal.